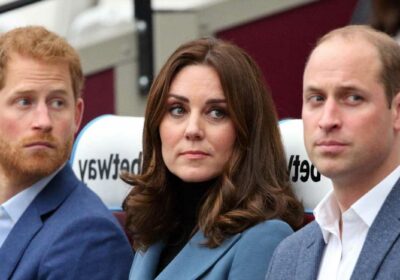 Kay, so update on Prince William and Prince Harry’s ongoing tension: looks like the brothers did not end up meeting to smooth things over after their grandfather Prince Philip’s funeral in April. Royal author Robert Lacey, who’s also a historical consultant for Netflix’s The Crown, just dropped an updated version of his dramatically-titled book Battle of the Brothers and revealed that Prince William and Kate Middleton feared that any convos with Harry would be leaked.

Per The Times (via The Sun), who published a portion of Lacey’s new tea, “They told friends that they could see no point in talking to Harry, since any discussion of substance would go straight back to Meghan to be leaked out via Oprah [Winfrey] or some other tentacle of the Sussex network.”

Wow, rude. Apparently this attitude was in part a reaction to Gayle King revealing that Prince Harry and Prince William’s conversations haven’t been productive. According to royal reporter Rebecca English, the palace had an “icy” response, with a senior royal source saying, “None of the households—the Queen, the Prince of Wales, and the Duke and Duchess of Cambridge—will be giving a running commentary on private conversations.”

Just FYI, all Gayle said was that William and Harry had spoken and that the convos “were not productive,” so she hardly provided a “running commentary.”

Either way, a source at the time also told Us Weekly that “William was left reeling. He says it was a cheap shot to leak details of their private call and that he twisted the truth” and “now feels uncomfortable” talking to Harry because “he’s putting himself at risk of the same thing happening again.”

The brothers are set to reunite for the unveiling of Princess Diana’s statue at Kensington Palace, so hopefully they’ll have a chance to talk things out.