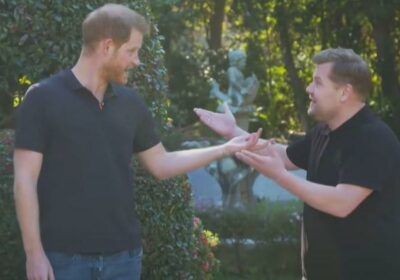 It’s believed thatPrince Harrymay host an episode of The Late Late Show in a bid to promote his upcoming memoir.

It was revealed earlier this year that the Duke of Sussex, 37, waswriting a tell-all memoir about his life,including “the highs and lows” he’s experienced.

He wrote in a statement shared by Random House, the memoir’s publisher, at the time: “I've worn many hats over the years, both literally and figuratively, and my hope is that in telling my story – the highs and lows, the mistakes, the lessons learned – I can help show that no matter where we come from, we have more in common than we think.” Harry went on to say that the memoir would be “accurate and wholly truthful”.

Now, with the book set for release some point next year, it’s believed Harry will be doing things to promote this book, including potentially hosting The Late Late Show.

Harry featured on The Late Late Show as a guest in February of this year in a segment titled: “An Afternoon with Prince Harry and James Corden”, where the two Brits travelled around parts of LA on an open top bus.

Discussing how Harry may host the show in the not-so-distant future, Royal commentator Neil Sean said toThe Express: “One of the ideas that they're floating around over at CBS is the fact that Prince Harry, for one night only, could simply take over The Late Late Show which is hosted by James Corden.

“When you think about it does make perfect sense simply because they're good chums and, of course, it would be a great way for Prince Harry to sell that book directly to the American public.

“They could film some sort of skits and jokes, the type of thing that happens on these late-night shows."

Neil continued: “Now a lot of people may skip and say, 'oh, this won't happen'. Let’s not forget he does have to do something to sell the book.

“It can't be all serious, they need to be able to show a fun side and as ever we have to say allegedly at this stage it's very early days but this has happened.”

Prince Harry moved to LA with his wife, Meghan Markle, earlier this year, and later welcomed their daughter Lilibet there. Meanwhile, their first child, Archie, was born in the UK.