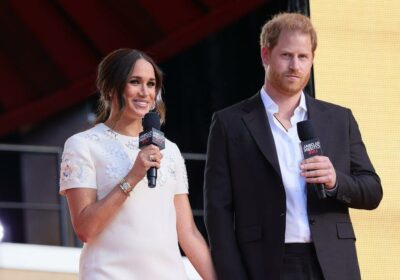 Prince Harry and Meghan Markle will not be returning to the UK to attend an event in honour of Princess Diana later this month, according to latest reports.

The Duke and Duchess of Sussex were thought to be considering returning to the UK to join guests including Harry’s brotherPrince Williamat the previously postponed event in honour of Princess Diana.

With the latest ease in travel restrictions, Harry, 37, and Meghan, 40, would no longer need to quarantine on arrival in the UK if they were to attend the event to be held at Kensington Palace later this month.

For all the latest Royal news, sign up for OK!'s daily newsletter here.

The Sussexes had been rumoured to be flying over for the event with their children Archie, two and four month old Lilibet but The Telegraph has reported they will not be attending.

OK! has contacted Harry and Meghan’s representative for comment.

The event, previously postponed due to Covid, is to thank the donors who helped fund the statue of Diana unveiled earlier this year.

The unveiling back in July, was the last time Prince Harry was in the UK wherehe joined his brother William to unveil statue of late mum Princess Diana.

The statue was unveiled in the Sunken Garden at Kensington Palace in London, on Thursday 1 July, on what would have been her 60th birthday.

This latest event has also been forced to be drastically downscaled due to the Covid pandemic, with the party’s original date being postponed and the statue unveiling scaled down to only be in front of a small number of her closest circle.

In a poignant scene at the statue unveiling, Diana’s sons walked side by side as the approached the statue in order to uncover it. Both men – who wore dark navy suits – smiled as they saw the finished piece.

William, 39, and Harry were seen chatting to the chairman of the statue committee Jamie Lowther-Pinkerton and greeting their aunties – Lady Sarah McCorquodale, 66, and Lady Jane Fellowes, 64, with kisses.

Princess Diana's younger brotherCharles Spencerwas also in attendance and was pictured making his way through the gardens in which the statue sits.

In a joint statement following the unveiling in July, the Duke of Cambridge and Duke of Sussex said: “Today, on what would have been our mother’s 60th birthday, we remember her love, strength and character – qualities that made her a force for good around the world, changing countless lives for the better.

“Thank you to Ian Rank-Broadley, Pip Morrison and their teams for their outstanding work, to the friends and donors who helped make this happen, and to all those around the world who keep our mother’s memory alive.”