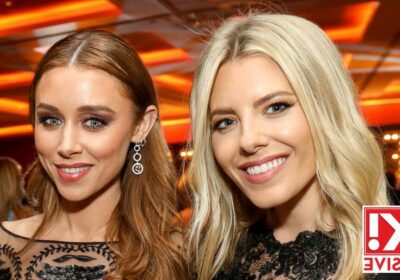 Like all first-time mums, former The Saturdays singer Mollie King, 35, will no doubt be keen to get as much advice from her friends and family as possible before the birth of her first child later this year.

But a source has told OK! that BBC Radio 1 presenter Mollie, who’s engaged to England cricketer Stuart Broad, 36, will be leaning on her old bandmate and mum of two Una Healy more than most, and that her pregnancy has made the former bandmates closer than ever.

The source said: "Her and Una’s relationship has changed now she's pregnant.

"She will be leaning on Una and going to her for advice throughout her pregnancy, and their bond will definitely be a lot stronger. Una wants to help her all she can through her journey."

The stars met up last week and proved that they’ve remained close since the band split back in 2014 by posting a pic on Instagram with the caption: "When it feels like no time at all has passed. So much to catch up on! Nothing beats a Saturday on a Sunday."

In an interview last year Mollie spoke about the hole the band – made up of her, Una, Rochelle Humes, Frankie Bridge and Vanessa White – has left in her life, saying: “I miss seeing the girls and I really miss performing” but insisted that they’re still in touch “all the time” and that they were the first people she told about Stuart proposing.

Mollie has been engaged to the sportsman since New Year’s Day last year after the pair started dating in 2012, and before announcing that she was expecting a baby, the star was thought to be planning their wedding, which she said she wants to be “relaxed and chilled and a really fun party”.

Understandably, the wedding plans are on the back burner for now though and while she’s “over the moon” about her pregnancy, it’s likely that she will be leaning on her pals more than ever given that Stuart’s career takes him away from home so much.

Our source added: "Mollie is used to Stuart being away because of his cricket.

"He’s always on tour or in training, so she’s quite used to them having a long-distance relationship.

"They’ve both very independent with their careers. It’s always been that way, and it works for them."

A source had previously told us: "This is Mollie’s dream to be pregnant. She is 100% focussing on the baby right now.

"She wants it to be well and healthy. She’s always wanted to have a family, so she’s so ready to become a mum."

"We will see her being open about her pregnancy too, which will be nice for her as it’s her first time. She’s been quite sick with morning sickness, so she wants some time to focus on herself, rest and have a bit less work on."