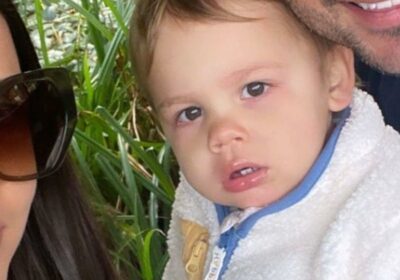 Lucy Mecklenburgh has revealed on Instagram that she took son Roman to the GP, where she learned that her little boy is suffering with ear and urine infections.

Lucy, who is currently pregnant with her second child, was concerned that Roman had been sleepy for the last few days, so went straight to the GP to get him checked over.

Her instincts were right, and the toddler has an ear and urine infection, needing antibiotics to clear it up.

Lucy explained: “Back to the doctors. He’s been super sleepy the last three days so I wanted to get him checked over to make sure it’s nothing serious. It’s an ear and urine infection poor baba!"

“Very happy we don’t have to spend a night in A&E tough. Antibiotics and cuddles.”

It comes after little Roman had a scary dash to hospital in September.

Lucy, 30, found Roman 'blue in his cot' and the tot was taken into St Mary’s Hospital in London and admitted to Intensive Care where he was put on a ventilator.

Roman, who Lucy shares with fiancé Ryan Thomas was diagnosed with a ‘viral induced wheeze’ and now requires an inhaler twice a day. Thankfully Roman was discharged to recover at home just a few days later.

Lucy has revealed her fears that Roman may suffer from a weakened immune system, having been born in lockdown.

Speaking on the Sweat Snot & Tears podcast Lucy said: “I don't know this for a fact, but Roman was born ten days before Covid and because he was kept so isolated – literally isolated for six months – he didn't have the chance to fight off viruses.

"When he was in hospital, the test came back that he had six viruses, so what looked to me as a snotty nose was six viruses, so that's what his little body was having to fight and that's potentially why he was so poorly and got to the stage of needing a ventilator.

"But it does make you think, if he had been in a normal world at the beginning, would he have been able to fight those viruses."

Since his hospital admission Lucy has become involved with charities that help sick children and help give back to the hospital that treated Roman.

She explained: “I am eternally grateful to the ambulance service for arriving so quickly, to Basildon hospital, the CATS team (Children Action Transport Services) St Mary's London PICU and Cosmic Charity (Caring for babies & children in intensive care).

“I would love to do something in return and help other sick children and their families. I'd like to help with the new children's garden area at Basildon Hospital as it's unusable at the moment and I know it would bring so much joy to children on the wards."

She said: 'I'd also like to support Cosmic charity with a donation from us, and a promise I will support this charity as much as I can in the future."

She said: “If you would be generous enough to support this incredible charity there's a Just Giving page in my bio which would mean the world to me if you made a donation and this is why.

“Cosmic Charity raises significant funds for the children's intensive care unit at St Mary's Hospital London which Roman was transported to when Basildon Hospital could simply do no more for him.”

For more updates on Lucy Mecklenburgh, sign up to our daily OK! newsletter.