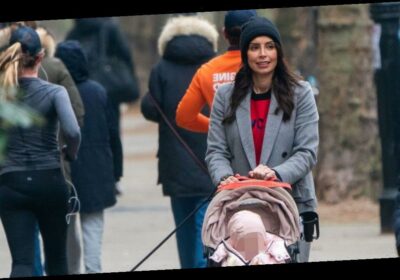 Christine Lampard has been seen for the first time since announcing she is pregnant with her second child.

Over the weekend the wife of Chelsea manager Frank Lampard told her fans the couple are expecting their second child.

On Sunday the popular TV presenter, 41, was seen walking with her two year old daughter Patricia and their dog Minnie in Hyde Park, London.

Christine and her daughter were wrapped up warm in big coats and wooly hats as they endured the cold conditions. Loose Women star Christine announced the happy news of her pregnancy on her Instagram feed with a gorgeous photo of herself cradling her baby bump.

"It’s been a strange and worrying time to be pregnant but we’re hoping and praying that cuddles from family and friends are not too far off. "Sending all my love to everyone going through pregnancy during this crazy time," alongside a praying hands emoji and a baby emoji.

Christine and Frank welcomed Patricia into the world back in 2018.

Frank, who stepped out for a date night with Christine recently, has two daughters Luna, 15, and Isla, 13, from his relationship with Elen Rivas. Christine and Frank tied the knot in 2015. The Loose Women star recently opened up on her marriage to Frank.

Speaking candidly on her romance, Christine said she and former footballer Frank met at the right time.

Christine said: “Do you know what, even aside from the footballer and all bit I think it was a lot to do with timing. “I was 29 when I met Frank and he was 30 so we’d both done a lot in our 20s and as you sort of work your way through your 20s and you grow up and make mistakes, potentially, and you live a little bit.

“And, actually I am very pleased that we’d both done that before we met each other because if we had met at 19 or 20, maybe it wouldn’t have lasted – you wouldn’t know.”