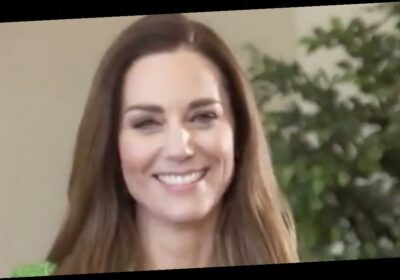 It’s been a turbulent time for Kate Middleton following shock revelations in the Duke and Duchess of Sussex’s interview with Oprah Winfrey – with fans even commenting that she appeared sad and downcast at royal engagements in the days following.

But the smile was back on her face as she appeared alongside her husband in a St Patrick’s Day message from the Irish government, wearing a £60 green blazer from Zara in honour of the occasion.

And she seemed in high spirits again as she and William visited Newham Ambulance Station in east London to speak to ambulance staff and paramedics about their experiences working throughout the Covid-19 crisis.

“Pippa’s baby joy has been a welcome distraction for Kate after a difficult few weeks,” Katie explains. “It’s really put a smile back on her face.”

Pippa, 37, also appeared to pay tribute to her family with her choice of middle name for her daughter, as Elizabeth is also the middle name of Kate, 39, and their mother Carole, 66.

Katie believes the homage will not have gone unnoticed. “Family is everything to Kate and she is so close to Pippa,” Katie explains. “Pippa giving Grace the same middle name as Kate and Carole will be such a touching tribute and mean so much to them.”

Pippa is already a mum to son Arthur, two, while Kate has Prince George, seven, Princess Charlotte, five, and Prince Louis, two. And despite the recent lockdown forcing the families apart, Katie insists the sisters are devoted aunties who have always strived
to raise their children the way they were brought up by their parents, Carole and Michael.

“Pippa and Kate’s children used to spend so much time together before lockdown and they are both hands-on aunties,” she says. “George, Charlotte and Louis adore Pippa and she’s a really fun aunt. Both Pippa and Kate look to Carole for parenting advice. She is always there for them. But Kate and Pippa do swap tips, and now Pippa has a daughter she will no doubt lean on Kate even more.

“Both sisters have always wanted to raise their children to have the same childhood they grew up with – grounded, happy and very outdoorsy. Kate knows the difficulties she may face as her children are in the public eye but she is focused on keeping them grounded, especially as her own family have kept her feet firmly on the ground.”

In fact, Kate’s grounded nature was evident when she made a personal, unannounced visit to Sarah Everard’s shrine on Clapham Common, with no obvious security.

Kate and Prince William, 38, are no doubt still digesting the revelations from Prince Harry and Meghan Markle’s interview with Oprah Winfrey. In it, Meghan, 39, revealed she had been left in tears by Kate, who she said was upset over the flower girl dresses for her wedding to Harry, and that a member of the royal family had expressed concerns over their son Archie’s skin tone.

Appearing to hit back at the claims two weeks ago, Prince William insisted he had yet to speak to his brother but insisted the family was “very much not racist”.

Days later, Oprah’s good friend Gayle King revealed that Harry, 36, had spoken with William and their father, Prince Charles, but claimed the talks had proven “unproductive”.

Katie adds, “Kate has been there for William recently, especially after his conversations with Harry didn’t go too well. Kate has always remained loyal to William despite how close she was to Harry. Her loyalties are with her husband and their family. Even though she’d love peace and harmony, she sympathises with William’s upset and anger.”

And Katie believes that in a chaotic time for the royal family, the Middletons have proven to be a much-needed escape for both Kate and William.

She explains, “The Middletons have always been that anchor for Kate and William. It’s a real sense of normality amid any chaos. William has always loved spending time with all the Middletons as it’s his escapism. He’s close to Carole and Michael and always insisted the royal family treat them well, which the Queen has done. She welcomed them with open arms.

“William has found weekends away with them so relaxing. It’s a close-knit family and more than anything, they’re very normal. It’s the family dynamic he wished he’d had growing up and it’s how he’s trying to raise his own kids.”