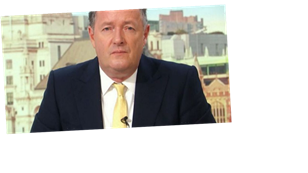 Piers Morgan has warned the "woke crowd" that they haven't cancelled him hours before GB news chairman Andrew Neil said the TV presenter would be a "huge asset".

The 55 year old spoke to reporters outside his London home following his dramatic exit from Good Morning Britain on Tuesday, 9 March, after being slammed for his remarks over Meghan Markle.

Seemingly in a cheery mood, he told journalists: "I think it’s fair to say, although the woke crowd will think that they’ve cancelled me, I think they will be rather disappointed when I re-emerge."

He added: "I would call it a temporary hibernation," before insisting that he is "always in talks with people".

Piers' comments came just hours before the chairman of incoming television news channel GB News said he would be "delighted" to negotiate with the TV personality to join their team.

Speaking to BBC, Andrew said: "Piers would be a huge asset to GB News and we'll definitely look at that, but we haven't started any negotiations yet. But we would certainly be delighted to talk to him if he's up for it."

When asked if Piers would be allowed to make similar opinionated comments as he did on Good Morning Britain before his departure from the show, Andrew replied: "You'll understand that I wouldn't want to negotiate with Piers Morgan on the airwaves of the BBC.

"All I would say is that I wouldn't want to simply transfer what he did at GMB onto GB News. But could we find a role for Piers Morgan? Of course we could, any network worth its salt could find a role for a broadcaster of his kind."

ITV confirmed Piers would no longer continue his role on GMB in a statement yesterday, which read: "Following discussions with ITV, Piers Morgan has decided now is the time to leave Good Morning Britain.

"ITV has accepted this decision and has nothing further to add."

Media watchdog Ofcom had received 41,000 complaints over his behaviour on the show that morning, where he hinted that he didn't believe Meghan Markle when she said she had suicidal thoughts five months into her pregnancy with Archie while part of the Royal Family.

"They've trashed everything the Queen has worked so hard to maintain, the monarchy, and we're supposed to believe they're compassionate?"

Co-host Susanna Reid responded: "They felt they were trashed and lied about. She said she was driven to the verge of taking her own life."

The former Britain's Got Talent judge added: "They said that yeah," hinting he doesn't believe her claims.