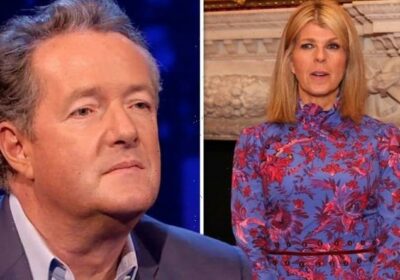 Piers Morgan, 56, has revealed he is quitting his ITV show Life Stories. Following his exit, the presenter will be replaced by his final guest, Kate Garraway, 54.

“My final one will be with ⁦my fabulous friend @kategarraway and she will then present the remaining 3 planned shows of the next series as I leave ITV to host my new global daily show.

He is set to take on a new role away from ITV as he joins talkTV from next year.

Kate is expected to speak to Piers about her husband Derek Draper’s battle with long Covid during his final episode.

Piers told The Sun: “I can’t think of anyone who I’d rather finish my run with.

“Kate was a wonderfully loyal colleague during my five years on Good Morning Britain and is one of my favourite people in the world.

“How she’s handled the devastating situation with Derek sums her up.

“She’ll be as brilliant at Life Stories as she is at everything else.”

“But he did say you’ll be gripping and wonderful in your own right.”

An ITV source also told the publication: “Piers has created a legendary format.

Piers has hosted Life Stories since its first episode in 2009.

Piers quit his other role on ITV after his comments about Meghan Markle sparked backlash from GMB viewers.

The star’s new career move with News Corp comes after he was cleared by Ofcom last month over disbelieving the Duchess of Sussex’s claims about her life in the Royal Family from her Oprah Winfrey interview.

He wrote on Twitter at the time: “I’m delighted OFCOM has endorsed my right to disbelieve the Duke & Duchess of Sussex’s incendiary claims to Oprah Winfrey, many of which have proven to be untrue.