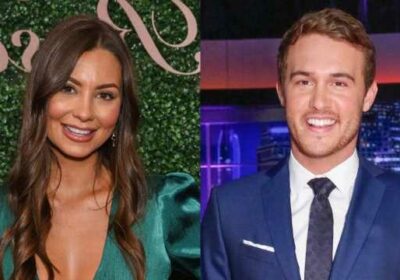 Peter Weber isn’t a fan of his ex’s recent interview. Nearly six months after his split from Kelley Flanagan, the 29-year-old former Bachelor called her out for publicly discussing details of their relationship and eventual breakup.

“I’m going to be so brutally honest with you guys… and just speak from the heart. I thought it was very calculated. I thought after hearing how it went that it was very trying to push for a headline. Very calculated, very disingenuous,” Peter said of Kelley’s interview. “That’s too bad. I didn’t necessarily expect that from Kelley.”

“… This has been half a year, which is even crazier now, in my opinion, that more podcasts are continuing to come out and talk about this. There is nothing new here. There is no new news,” he added. “This is literally half a year old, and that’s why I bring it back to this calculated point that I talked about in the beginning and wanting to ride it as long as she possibly can, or make headlines, or get people talking.”

Peter noted that Kelley’s interview caught him “off guard” because, he claimed, Kelley’s friend told him that he’d have to make some “grandiose gesture” or “big, public display” to get back in his ex’s good graces.

“I’m not confrontational. Even if we were not meant to ever be together again, I hate the idea of not being able to at least be cordial with someone that you were so close to at one point and meant so much to you,” he said. “I do not like that idea. A reason behind me asking how Kelley’s doing was to possibly get to that point.”

Then, two weeks ago, he texted his ex to see if they could talk some things out and, Peter claimed, got “zero response.”

“[She] goes on and would talk about our private relationship to the public, and not, again, to the only person, other than her, that should matter in that relationship, or failed relationship,” he said. “… That’s what I wasn’t OK with. It screamed, ‘I want a headline! I want to ride this out as long as I can!’… I have an issue with that.”

“I would love to have a private talk with her and not do it for the public or to get headlines going or for the media to pick it up,” he added. “That’s not what I’m about.”

As for the end of their relationship — which Peter decided to “leave” in 2020 by publicly announcing it on New Year’s Eve, something Kelley took issue with — Peter said it came down to their differences.

Kelley said something similar during her interview, stating, “He loves Pokémon cards and he loves playing video games and he loves going out and partying. There was a while where I was trying to convince myself that that’s what I liked and I was like, ‘Alright, Kelley, let’s be honest with yourself. Does that add up for you? Eh, probably not.'”

Despite Kelley admitting that she told Peter to “get the hell out of my life” and “lose my number” when they split, the former Bachelor said he thinks back fondly on their relationship and hopes for the best for his ex.

“Kelley was the best relationship that I have ever had in my life. And [I] could not be more grateful for that 10 months that we did have together,” he said. “Yes, it was not perfect. No relationship is, obviously, but [I’m] so, so grateful for that time. I care very, very deeply for Kel… I think the world of Kelley. I truly do. I know she said whatever. She said a lot of things. I’m never going to attack her like that. I won’t.”

He did express his wish, though, that Kelley would “finally” put their split “to rest and just look forward.”

“Kelley is so much more than just a girl from The Bachelor, a girl that I was in a relationship with. She is so much more than that, and I wish that she would talk on that more and kind of just, like, leave this be,” Peter said. “…  There’s so much that this girl has that the majority of people don’t even know… To me, caring for Kel so much and seeing her kind of stay in this realm on what she wants to talk on and make headlines about… there’s just so much more.”

“… No matter what, I’m always going to care very deeply for Kel. I’m going to root for her. She’s truly one of the most bada** women I’ve ever met in my entire life, and nothing will ever make me think differently,” he continued. “… I hold that relationship in such high regard and I always will. Kelley knows that. She knows how much she has meant to me and means to me, and how much I will always care about her. She knows that. Nothing about that is empty.”

Despite his kind words for his ex, Peter said he’s “100 percent moved on” from their relationship.

“I’m more than 100 percent moved on. I know that we aren’t right for each other. I’ve accepted that. I’m so thankful for our time together, but I know that Kelley and I aren’t meant to be together, and that’s OK,” he said. “I can’t wait to find my person, I can’t wait for her to find hers.”

As for his current state of mind, Peter said he’s “just so damn happy where I’m at in my life.”