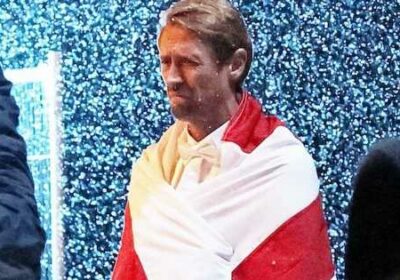 There are just eighteen days to go until the first game of this year's hotly-anticipated World Cup, which is taking place in Qatar.

Former footballing legend Peter Crouch, 41, has been seen filming the Paddy Power World Cup advert, which sees him being thrown out of a pub in London, looking like a die-hard England fan as he's draped in a patriotic flag.

He was seen dressed in suit trousers and a white shirt as he and onlookers were drenched in fake snow, before he was hoisted over the shoulder of a 'bouncer' who was clad in a puffer jacket to keep out the cold.

Peter looked like he'd caused some havoc as he was manhandled out of the 'pub', but thankfully, it was all part of the filming for the advert, which has yet to be released.

The 6ft 7 dad of four has enjoyed a successful career in football, having played for the likes of Tottenham, Liverpool FC and the England national team during his career.

The ex-striker recently stepped in for Mo Gilligan for the second series of the surreal ITV guessing game, The Masked Dancer, as the comedian is unavailable due to touring commitments.

He recently revealed that his children are more interested in him joining the panel of the show than in his extensive footballing career.

Comedian and presenter Joel Dommett returned to host the show with his usual comedic style.

Ahead of the first episode of The Masked Dancer, Peter said: “It’s madness. Completely different to anything that I’ve ever done before.

“My kids love the show. I played football for England and Liverpool, I played in cup finals, played in the Premier League and played in world cups, but my kids, the only thing they want to talk to me about is The Masked Dancer.

Peter said that after his footballing career he was now doing things “because they look like they’re going to be a lot of fun”.