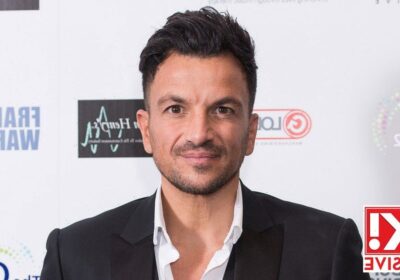 Peter Andre hosted Miss World back in 2019, and after a year off due to the coronavirus pandemic, he is again taking on the incredible opportunity.

The Mysterious Girl hitmaker, 48, says a total of 2 billion people worldwide tuned in two years ago, and it's expected to be an even bigger turn-out on the competition's much-anticipated return. Sign up as an OK! VIP – for free! – to read all about Peter addressing the challenges he faced when starring in the film On the Other Foot and why he thinks another lockdown wouldn't be the best idea.

Are you an OK! VIP? If not, why not? It’s free and gives you backstage access to stories like this, exclusive home tours, special discounts and so much more! All you need to do is pop your email address below! P.s. if you’re already seeing this article in full, congrats – you’re already on our guest list! It’s been a full-on week. Firstly, it was the premiere of the film On The Other Foot, in which I play a character called Justin. The focus is on the subject of racism, but with a twist. It’s a really incredible film to be a part of, and the director Fredi Nwaka is a genius.

Playing Justin challenged me a lot, but that’s what Fredi wanted. He said, “I want no one to expect you to be the bad guy.”

It was a great experience. We’re hopefully starting a new film in February or March, which I will not only act in but will have my first production credit on, too. But I’ll tell you more about that when the time is right. Exciting times! I’m very happy to announce I will be hosting Miss World 2021. The last time I hosted in 2019, we had an audience of two billion people worldwide, so this year will hopefully be bigger and even better! Miss World has changed so much over the years.

Certain categories have been scrapped and the focus has become much more about the achievements and philanthropic efforts of the contestants. It’s going to be amazing and, as always, I’m honoured to be a part of it.

I know it sounds bad but I actually haven’t had a chance to watch I’m A Celebrity… Get Me Out of Here! this year. It’s always on when I’ve been on stage in Grease, but I’ve been hearing bits and pieces about what’s been going on so far.

I’m rooting for Arlene Phillips, as she is my dear friend and a wonderful person. Also, the lovely Frankie Bridge, who I’ve known for years.

I never even knew Arlene was going into the Castle! I was working with her for months beforehand, and she never mentioned a thing. I didn’t think it would be something she would do. She’s such a lovely person – I’m happy everyone is getting to see her personality shine through.

The government has repeatedly said it has no plans for another lockdown in the UK, but more and more concerns are growing over the new Omicron variant. The problem is that inevitably there are always going to be newly identified variants – a virus is always going to mutate.

We have to do everything we can to protect the vulnerable and I think the booster is a great idea. But I’m not sure that another lockdown will be the right thing to do.

Wearing masks in crowded places does make sense though. In fact, I never stopped wearing one. Let’s just hope this Christmas doesn’t end up being like last year. Be safe, everyone.

For all your updates on Peter Andre, sign up to our daily OK! newsletter.