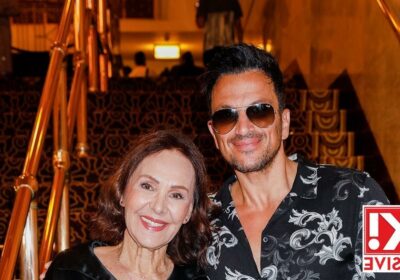 Dame Arlene Phillips has heaped praise on Peter Andre for taking to the stage after suffering public humiliation about the alleged size of his manhood.

The Grease choreographer branded the actor “remarkable” as he showed his resilience by performing as Vince Fontaine at The Dominion Theatre in London hours after being dragged into the Wagatha Christie high court drama.

Pete’s name took centre stage in the trial after Rebekah Vardy’s historic interview about their alleged night together was brought up in the courtroom, in which she talked about “having had sex” with the star and that he was “hung like a miniature chipolata”.

“Peter just gets on with it – and that’s what we like,” says Arlene. “With Peter, you don’t rally around. He just knows the support he gets and the love he gets.

“There’s a sense of Peter owning everything about himself and facing up to it – even if he’s being criticised. I cannot speak more highly of him.

“He’s a joy to work with, he’s remarkable and his warmth affects everyone in the company.”

Rebekah, wife of Leicester City footballer Jamie Vardy, was grilled by Coleen’s lawyer while being cross-examined, and was asked about the interview quotes she gave about Pete’s manhood.

Barrister David Sherborne questioned, “Did you think it was respectful of Mr Andre’s desire not for this to be made public for you to say all this to the News Of The World and 4 million readers?” to which she replied, “I was forced into a situation by my ex-husband to do this story.”

Rebekah gave the interview in 2004 after enjoying a reported fling with Peter back in 2001.

The trial, which continues this week, is the culmination of a nearly three-year long battle between Coleen, 36, and Rebekah, 40, which began when the former accused the latter’s Instagram account of leaking stories.

Grease is currently running at the Dominion Theatre, West End. For tickets visitgreasemusical.co.uk

For more on Peter Andre, sign up for OK! 's daily newsletter here.