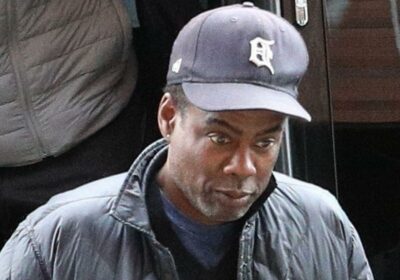 Comedian Chris Rock has been spotted looking serious and deep in thought as he continues to "process" getting slapped by Will Smith at the Oscars on Sunday night.

The 57 year old funnyman had made a G I Jane joke about the Seven Pounds actor's wife Jada Pinkett Smith, 50. Jada suffers from the autoimmune disease alopecia and recently decided to shave her head to take control of the hair loss.

Will, 53, initially laughed at the presenter's quip but in response to his wife's eye roll, he became angry and emotional.

Storming onto the stage, Will proceeded to loudly slap Chris before returning to his seat, where he then shouted at the comic: "Keep my wife's name out of your f*****g mouth."

Ahead his first public appearance since the incident, Chris kept his head down as he arrived in Boston, Massachusetts, for his next stand-up show.

Wearing a blue T-shirt, black v-neck jumper and grey khaki trousers, the star was bundled up for the cold with a navy puffy jacket and donned a cap on his head.

The sighting came just before Chris broke his silence on what happened at the 94th Academy Awards.

Appearing teary-eyed to a packed-out audience of his fans, the star was open about his state of mind.

"Let me be all misty and s**t," Chris began, before switching gears for a slice of his signature wit instead.

"How was your weekend?" the comedian deadpanned, as the whole venue burst into laughter.

Chris warned his fans that if they were expecting to hear gossip about the Oscars slap, they would be sorely disappointed because the whole show was already written and planned beforehand.

"I don't have a bunch of s**t about what happened, so if you came to hear that, I had like a whole show I wrote before this weekend," he said, before admitting that he was still going over events in his head.

"And I'm still kind of processing what happened, so at some point I'll talk about that s**t.

"And it'll be serious and it'll be funny, but right now I'm going to tell some jokes," Chris added.

Since the Oscars, Will Smith has publicly apologised to Chris with a lengthy statement on his Instagram page.

The actor, who won the award for Best Actor for the film King Richard after the altercation took place, also said he condemns "violence in all its forms", calling it "poisonous".

Meanwhile Jada also appeared to reference what had happened, posting a message saying now was a "time of healing".

The Academy have also admitted their own failings on the evening, releasing a statement which read, "Mr Smith was asked to leave the ceremony and refused, [but] we also recognize we could have handled the situation differently."

For all the latest news on Will Smith, sign up to our daily newsletter here.