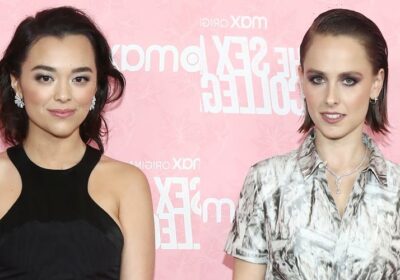 Pauline Chalamet slicks her hair back for the premiere of her new series The Sex Lives of College Girls held at Hammer Museum on Wednesday (November 10) in Los Angeles.

The 29-year-old actress was joined at the event by several of her co-stars, including Midori Francis, Renee Rapp, Amrit Kaur, Kavi Ladnier, and Alyah Chanelle Scott, as well as creator and executive producer Mindy Kaling.

In attendance to show their support were stars from Mindy‘s other show Never Have I Ever Richa Moorjani, Lee Rodriguez and Christina Kartchner, plus Pretty Smart‘s Cinthya Carmona, singer/actress Nikki Hahn and Emma Brooks.

The Sex Lives of College Girls will premiere on HBO Max NEXT Thursday, November 18th. Check out the trailer here!

See all the premiere photos in the gallery…