Home » Celebrities » Paris Fury opens up on baby daughter Athena’s close call: ‘She was dying in my arms’ 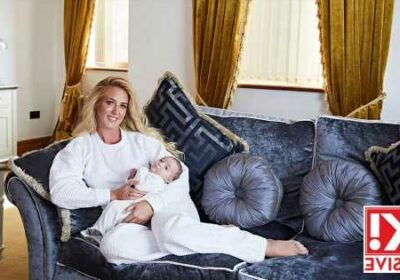 She’s married to one of the most famous sportsmen in the world and has become a celebrity in her own right – but Paris Fury insists neither she nor husband Tyson set out to be famous.

Tyson, 33, who is nicknamed The Gypsy King due to his Traveller roots, claimed Deontay Wilder’s WBC belt in 2020 to become a two-time world heavyweight champion.

And after defending his title in their Las Vegas rematch earlier this month, he is now up there with the likes of Muhammad Ali in terms of success.

But while his sporting prowess means it is unlikely the couple will ever face money troubles, life has had its challenges.

Tyson has been very open about suffering from mental health issues following his first world championships win, when he took the WBA, IBF and WBO belts from Wladimir Klitschko in Germany in 2015.

Paris, who is releasing autobiography Love And Fury, talks candidly about the strain of supporting him through his darkest days while caring for their kids, saying, “It took a lot of strength to be the backbone because Tyson at the time was completely sinking.”

But while Paris always wanted a big family, she admits she’s unsure about having any more children after Athena suffered serious health complications and stopped breathing shortly after she was born.

Here, the 31-year-old chats about being a mum, why she’ll never feel comfortable when Tyson enters the ring and why she felt it was time to tell her own story…

Hi, Paris. What made you want to write an autobiography?

I’ve read so many different things about me but I’ve never actually put any of my own story out there. So it’s my chance to really get the word out, the truth of my life and my family life.

Is Tyson supportive of you speaking out?

He’s really supportive and encouraging. I think it’s a chance for me to do something for myself. I’ve always supported Tyson and, yes, I wanted to be a mother and a wife, and I’ve done other wonderful things like travel the world.

But now I feel like it’s time to do something just for me and bringing a book out feels like a great start to that.

You got together with Tyson so young. Did you ever expect to be drawn into the limelight?

I didn’t expect it when we first met. When we were teenagers and he told me under a tree at 17 that he was going to be the world heavyweight boxing champion, I thought, “You’re crazy!” I never expected it to progress as it has – and as it did, we just grew with it and adapted. It never came as a surprise but I never expected it to go so far.

You’ve been married a long time. Does both of you coming from Traveller families help your relationship?

It’s been grounding for both of us that we have the same beliefs and cultural ways. I don’t think it’s always necessary in a relationship but I do think it has helped us.

Was motherhood something you’ve always wanted?

It was just something instinctively in me that I always knew I wanted a big family. When I met Tyson, we both said the same thing, so that worked out well. It wasn’t all sunshine and roses to get the kids.

I fell for Venezuela really easily and had her at 19, then Prince straight away. But then I had a real struggle to have another baby. I lost one really far along and had a five-year gap of not getting pregnant. I had to go through fertility tests.

That must have been hard…

I think people look at me and think I’ve had six children, so I haven’t had problems. But it’s actually quite the opposite.

How are all the kids doing now?

I love being a mother though, I love that they keep me so busy and it’s what I enjoy in life.

How is Athena doing?

She’s doing brilliantly. Thank God everything that was a problem has now gone. She just gave us this big scare at the beginning but she’s doing really well and thriving.

What was wrong with her?

When Athena was born, her heart was beating ridiculously fast, doing over 300 beats a minute when it’s supposed to do something like 120. It causes a load of other complications, so they tried to slow it down.

Royal Lancaster Infirmary didn’t have the right equipment, so they blue-lighted us to Alder Hey Children’s Hospital and I can’t credit them any more, they are literally miracle workers.

We went over there and they sedated her and put her on an incubation, where they put a tube down her throat to breathe. They put her on tablets to slow her heart down and when they took her off the tube, they thought it was going to be normal.

But I think the accumulation of sedatives, painkillers, beta blockers for her heart and everything was just too much.

She was in my arms and she stopped breathing and became completely unresponsive. Her heart rate was fading away – she was dying in my arms.

They took her off me, put her on the table and resuscitated her. Tyson came running in. It was horrific. They managed to get her heart going and everything stabilised.

They put her back on a tube and then found out she didn’t need the heart medication any more, it had corrected itself. Once she got her strength back up, she came out of the hospital completely clear and fine.

But I didn’t sleep a wink for the first few weeks, I just stared at her. We’ve all decided she’s going to be spoiled!

Did you know there was anything wrong before you gave birth?

It was a complete shock but once we put some pieces together we realised her heart had been doing it inside the womb, because before the birth they were struggling to find a clear trace.

But at the time, when she was first born, it was completely unexpected.

We’re glad she’s OK now. Tyson has been open about his struggles with mental health. That must have been a tough period for you…

It was one of the lowest points. At that time, for the full two or three years it was going on, I was pregnant and having children.

It was very publicised what Tyson was going through. At the time, I didn’t even know some of the things that were going on with him.

When it went in the newspaper that he was abusing drugs, it was something I was unaware of. And then we went through all the times of him having suicidal thoughts.

Tyson would come in at times and say, “I’m not going to be here much longer, I can’t take any more.”

How did you cope?

I basically stayed strong and supported Tyson. Even in times when I wanted to leave, I never left. Tyson was only ever a problem to himself.

It upset our life together but I tried to hide it from the children and friends, and just keep everything looking smooth.

It took a lot of strength to be the backbone because Tyson at the time was completely sinking. So I think just supporting them and really staying strong for yourself is key.

There were times where I wanted to curl up and forget the whole thing but you can’t. As a woman, a mother, and a wife, I just felt the need to stay strong. He’s done incredibly, too.

The fact that he came back from where he was and went back into boxing, I’m really proud of him.

Did you have worries about his career as a boxer?

I worry all the time about Tyson going into the ring. Every time he has a fight, it’s not a pleasure. It’s just pure dread, anxiety and nerves all rolled into one.

If you imagine your partner was going outside and having to fight in the middle of the street, how nervous and horrible would you feel? It can’t be much different!

I know it’s watched over and there’s a referee, but it’s still a fight and a brutal sport. I worry but it’s his passion and what he loves in life, so I encourage him to do it.

Do the kids watch his fights?

When they were younger I kept them away but I let the older ones watch now. They’ve only been to one of Tyson’s fights in person and I wouldn’t recommend it. I don’t think it’s a place for children to be watching that when it’s their dad in the ring fighting.

For the latest news on the Fury family sign up for OK!'s daily newsletter here.

Do any of them want to follow in Tyson’s footsteps?

We’re never going to push them. Tyson would much prefer them to follow the academic route and be lawyers or something as it’s such a hard industry. The basic truth of it is he gets punched in the face for a living. And he does say it’s not the cleverest thing to do.

How would you describe your parenting style?

I’m the strict one and always dealing out the jobs and punishments. Tyson is much more easy-going, he’s calm and fun!

We’re trying our hardest. I want the children to be grounded and have the normal upbringing me and Tyson both had. We’ll go down to the Poundshop and the B&M, and I’ll say they can’t have certain things.

I’d be so disappointed if they grew up not knowing the value of anything, so we do try. But then there’s times where one of the little ones will go on an aeroplane, turn left to first class and say, “Get me a Diet Coke, please!” So we then scratch our heads and think we haven’t cracked it.

Is six children the limit or will you consider more?

Never say never. But with such a stressful time at the beginning with Athena, I really do question whether I’d have more now. It was the first time I’d ever had this serious problem with them, a real worry. It really shook me a bit and made me think whether we will have more.

Love And Fury: The Magic And Mayhem Of Life With Tyson is published on 28 October (Hodder & Stoughton, £20)