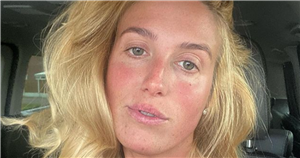 Paris Fury stripped back her usual glammed-up look in a beautiful natural snap of herself make-up free.

The 32-year-old, who is married to boxing champ Tyson fury, 33, shared a heartfelt message to her audience alongside the post.

The mum-of-six admitted feeling "comfortable and confident" in the glowing snap as she encouraged younger women to feel comfortable in their own skin.

Paris wrote: "Being natural isn’t a statement, it’s the closest thing to being yourself.

"At 32 with many miles behind me, I feel totally comfortable and confident in myself and I would love to push this onto young women.

"You are all beautiful in your own way. With out the makeup, lashes, filler!"

She added: "We don’t all need to look the same to feel beautiful. I don’t have big lips, long lashes, I do have freckles and some blemished, but hey! I’m me."

Fans were quick to gush over Paris' gorgeous fresh-faced post as one fan wrote: "Natural beauty. You are pushing the right message, especially when you have daughters yourself", alongside three red heart emojis.

Another penned: "Beautiful and such a role model to everyone", followed by two lovestruck emojis.

Recently, the star was snapped in a natural setting as she enjoyed working outside in a chic pair of leggings and matching crop top.

She revealed the devastating moment that she "screamed for help" after baby Athena had stopped breathing.

"She stopped breathing, she became non-responsive," Paris recalled on the episode. "I screamed for the nurses because she wasn't connected to none of the machines anymore."

Paris explained that the nurses quickly took Athena from her in an attempt to resuscitate her.

Tyson came "running in" as he returned to his distraught wife from a hospital duty break after "everything was going ok".

"He came running in, I just broke down and screamed. I said, 'She's dying! She's dying!', and it looked that way," Paris said.

Luckily that wasn't the case, and doctors were able to save her life.

The little tot is thankfully now healthy and well and she was recently snapped in an adorable photo alongside mum and dad on a luxe family trip to Dubai.