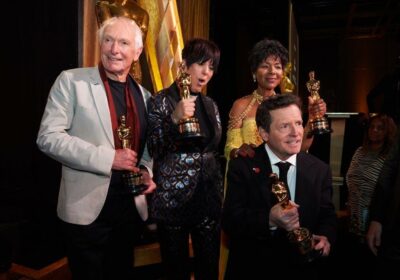 The 13th Annual Governors Awards of the Academy of Motion Picture Arts & Sciences on Saturday night came in with a vengeance, perhaps the biggest crowd of industry notables, Oscar contenders, and others I can ever remember at one of these events where AMPAS hands out honorary Academy Awards. It is a non-televised event which means the recipients can go on as long as they like with their acceptance speeches, and so for that matter can the presenters. The good news is this particular foursome of honorary winners, Peter Weir, Euzhan Palcy, Diane Warren, and Jean Hersholt Humanitarian Award recipient Michael J. Fox each made some of the most heartfelt and compelling speeches ever heard at the Governors Awards. It was an evening to remember.

Damien Chazelle's 'Babylon' With Brad Pitt & Margot Robbie Screens For Hollywood Crowd — Does It Have The Stuff Of Oscars?

Of course those who know this event which basically kicks off the Oscar season and bookends it with the actual Academy Awards ceremony (coming up next year on March 12), knows that in its prime it is going to be something that is a must-stop for every Oscar hopeful, the irresistible opportunity to schmooze in what is undoubtedly the largest gathering of voters outside of the big night itself. This year the Governors Awards held at the Fairmont Century Plaza hotel in Century City (where street construction made getting into the venue challenging to say the least) came back to full force and any signs of a pandemic that has affected it in major ways the past couple of years was invisible (it was actually cancelled in 2021 and reduced drastically in size in earlier this year when it was held March 25, a couple of days before the Oscars). It might as well have been 2019. Nobody looked concerned about Covid in this crowd. It was party time all the way and people seemed genuinely excited to be back together with zero restrictions for the first time in a long time. Look for a separate report coming up on the campaign aspect soon, but right now here were some highlights of the main event and the four winners of this year’s Governors Awards. Waiting to put our tickets in for our cars afterwards I ran into one of the attendees, Cate Blanchett who told me she was blown away and genuinely thrilled about this evening, particularlysingling out the sage words from fellow Aussie Weir. 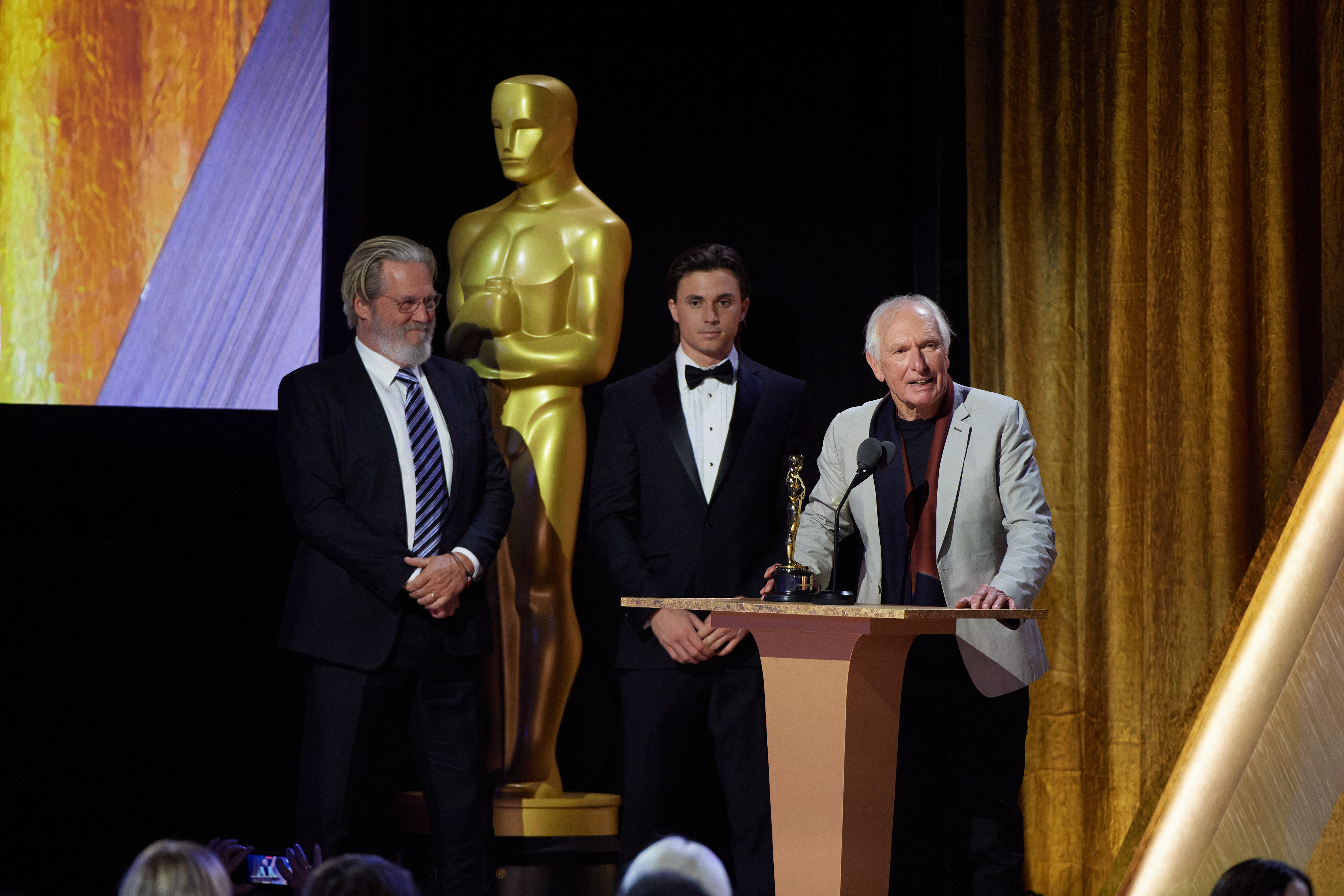 Jeff Bridges who starred for Australian director Peter Weir in Fearless presented him with his Honorary Oscar for a sterling career that includes such films as Picnic At Hanging Rock , Gallipoli, Witness, The Mosquito Coast, The Year Of Living Dangerously, Master & Commander, The Truman Show, Dead Poets Society,and many more. Weir in his acceptance didn’t use the teleprompter but instead spoke freely with a wonderful remembrance of what he has learned about filmmaking throughout his career, especially the importance of crews who hang together and each focusing on getting the job done, not always an easy task.  “Making these films is like a journey,” he said. “My crew always knew it wasn’t about my ego, or their egos, it was about the film’s ego.” He also told a story about taking the eventual Oscar winning screenplay for Witness and simply ripping out a few pages of dialogue he felt was completely unnecessary, instead choosing to shoot it without words between Harrison Ford and Kelly McGillis. Although it caused some consternation, he was proven right. Weir is a director who always brought a knowledge of what would work to all his films. The likes of Ford, Ethan Hawke, and Mel Gibson offered insights in a video package as well and Ford lamented Weir’s retirement from filmmaking and said he would work with him again “in a New York minute”. 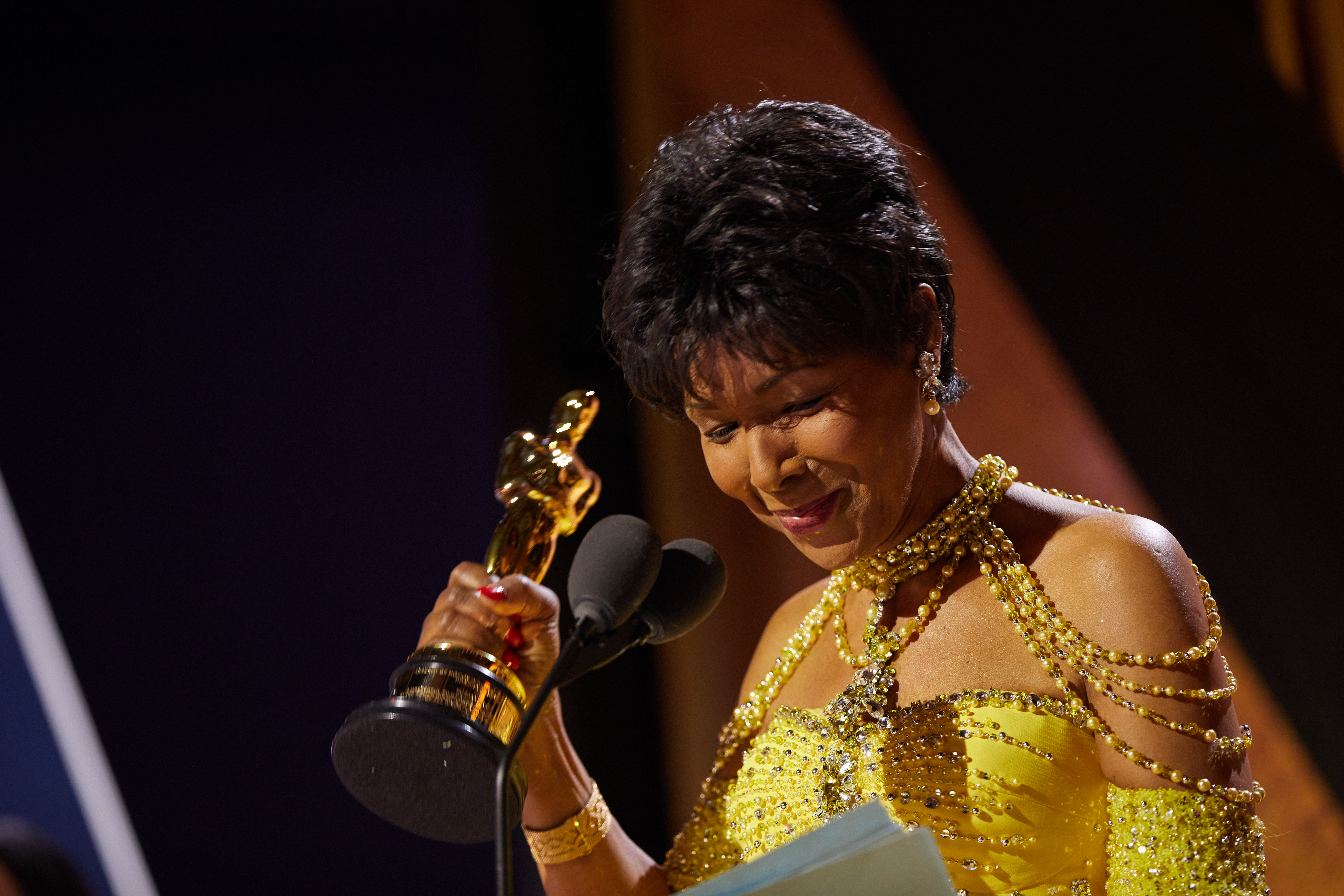 Filmmaker Euzhan Palcy is best known for films like Sugar Cane Alley, and particularly A Dry White Season, the 1989 film that lured Marlon Brando out of a nine year retirement (he won an Oscar nomination) and made her the first Black female director to make a film for a major studio. Viola Davis delivered a powerful introduction to her, and Palcy, clearly thrilled to be getting this honor offered advice like, “If you want to go fast, go alone, If you want to go far, go together”. She even went so far as to ask every table to link arms in a demonstration of connectiveness with our fellow human beings. She also said she is anxious to make more films to prove some people wrong. “Black is not bankable. Female is not bankable. Black and female is not bankable,” then pointing to Viola Davis as proof that simply is not true. “I want to aim my camera to bring our collective humanity into focus on the screen,” she said. 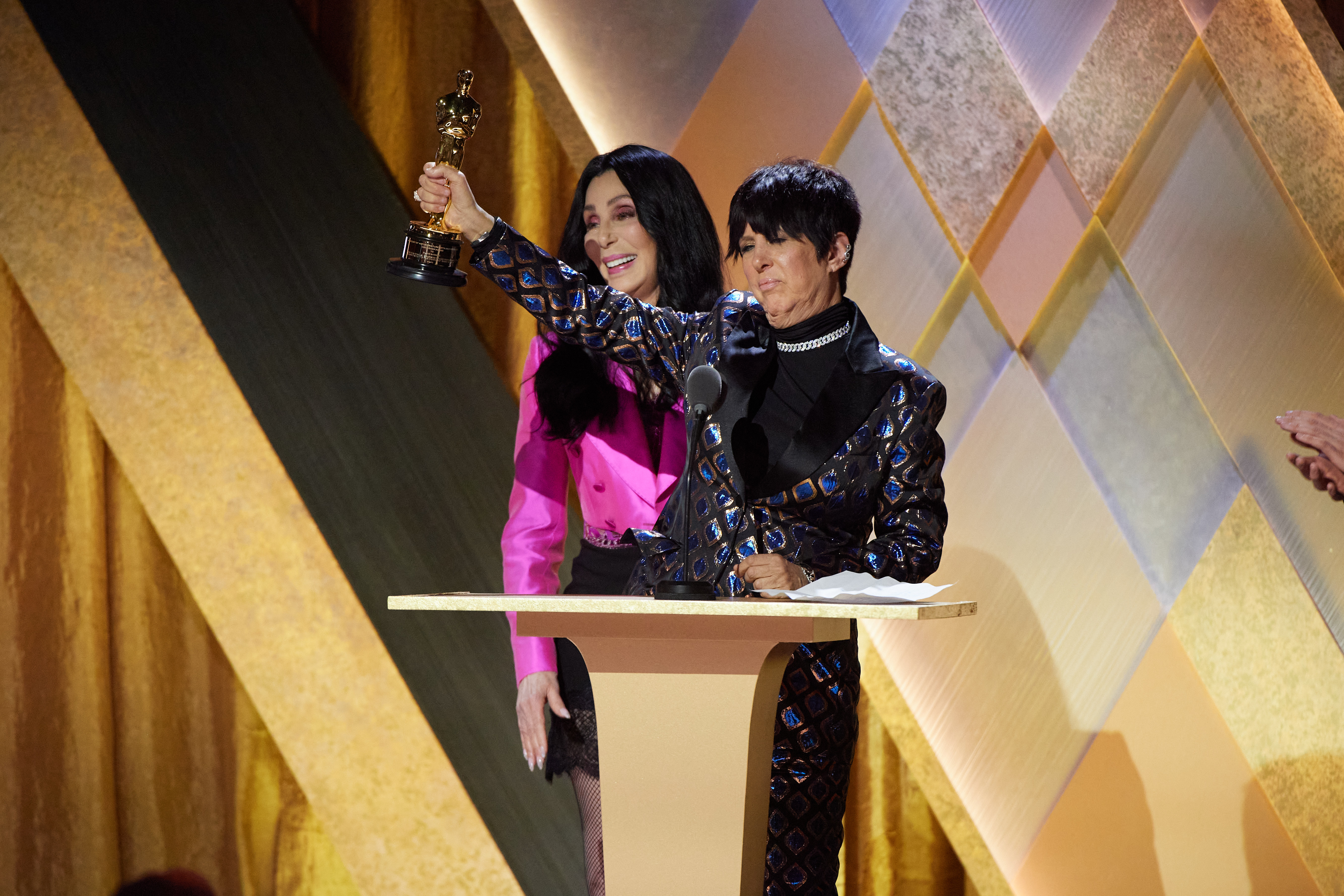 “My favorite story about Diane Warren is when she followed me into an Al-Anon meeting to play me a new song,” said Cher who presented the Honorary Oscar to prolific songwriter Warren, who has had 13 Oscar nominations with no wins from over 100 songs she has written for the movies. “She’s a motherf**ker. My kind of girl,” said Quincy Jones in the video package detailing her remarkable career. Cher noted Warren will always call and say “I’ve just written the best song I have ever written”. Work is her life, but finally having an Oscar is making a little difference.”Mom, I finally found a man, ” Warren exclaimed as she looked upward toward the heavens. “I have been waiting a f**king long time for him, 34 years to say ‘I’d like to thank the Academy’”. She noted that as a kid she went to see Born Free, and was instantly transformed and hooked by that film’s Oscar winning song from John Barry and Don Black. The rest is history. 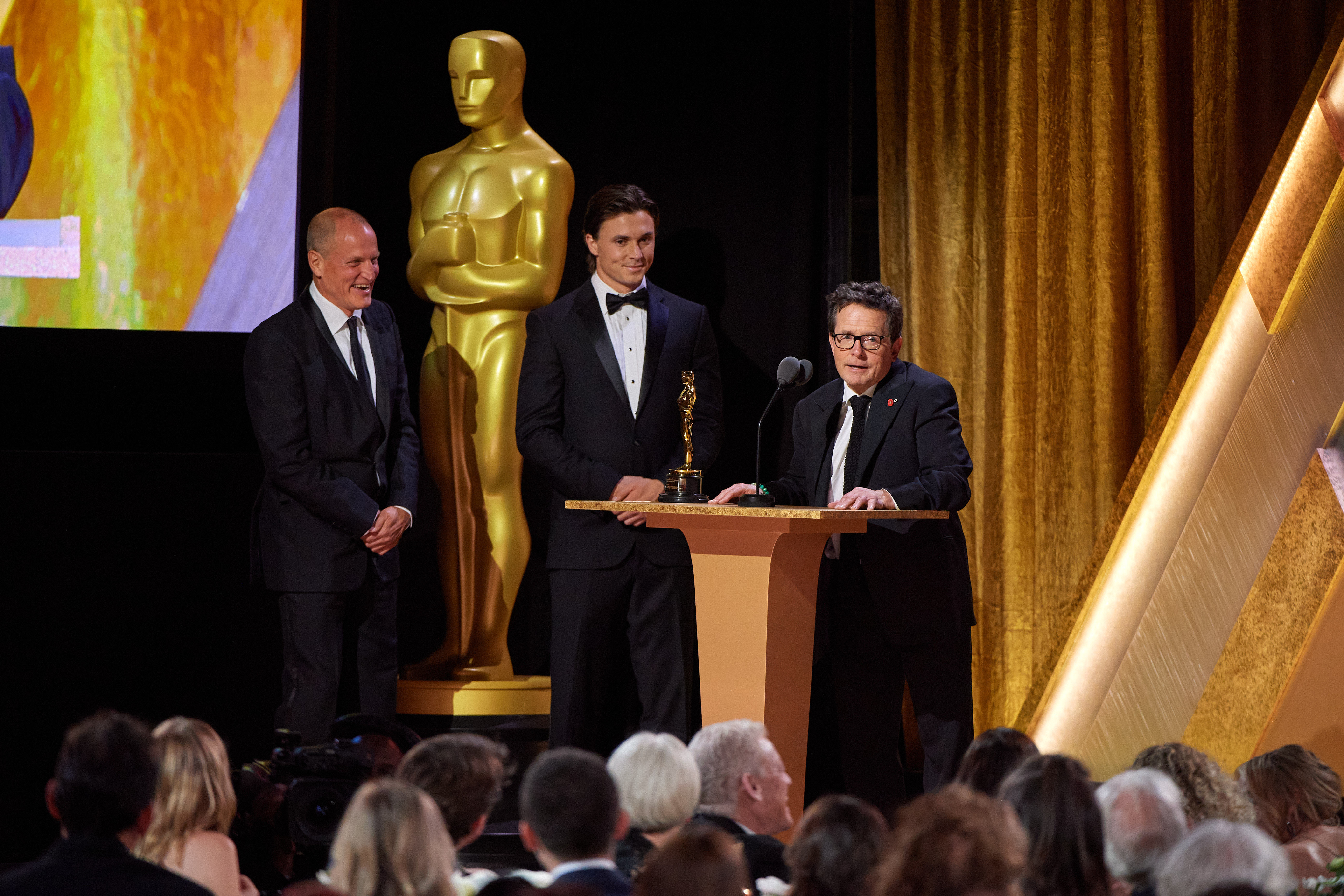 The fact that this year’s Jean Hersholt Humanitarian Award was presented to Michael J. Fox was not surprising. The only surprising thing was that it took this long. The man who was diagnosed with Parkinsons Disease at only age 29, has through his Foundation raised $1.5 billion dollars to fight the debilitating disease. There wasn’t a dry eye in the house as an extremely well produced video package told Fox’s story and how he has taken his own misfortune with Parkinsons and turned it into a major cause for good. His good friend Woody Harrelson, who got to know the star when Harrelson was doing Cheers , and Fox was doing Family Ties, made the presentation to the actor who called himself “80’s famous”. His mantra is now the Bruce Springsteen lyrics, “no repeat, no retreat, no surrender”. After a massive standing ovation he joked, “you guys are making me shake”. His entire family including wife Tracy Pollan was there rooting him on, and he even brought Pollan up on stage to help take that new Oscar home. “I use Tracy to carry the weight”, he said.

Quite a night. As AMPAS President Janet Yang looking out over the ballroom asked, “who wouldn’t want to be here?”