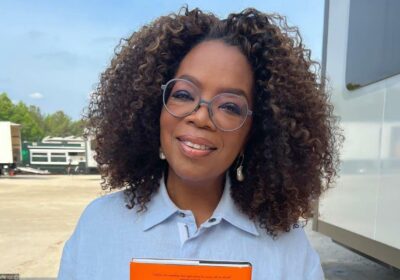 The billionaire tv host reveals to her best friend Gayle King, who is also in attendance, that her father Vernon Winfrey ‘doesn’t know’ that the celebration is for him.

AceShowbiz –Oprah Winfrey went all out in her attempts to honor her ailing father. When celebrating the Fourth of July,the media mogul surprised her dad Vernon Winfrey with an Appreciation Day barbeque.

The 68-year-old iconic TV host went on to note that she wanted to make sure her father knows how much he is loved. “My father is ill and so we wanted to be able to have all of his friends come and celebrate him while he’s able to receive the joy,” she elaborated.

Oprah’s best friend and fellow TV personality Gayle King, who also attended the bash, asked off camera if her dad was “excited” about the celebration. In response, the “A Wrinkle in Time” star said, “He, doesn’t even know that this is for him.”

“He thinks it’s a Fourth of July thing,” Oprah further explained. “He doesn’t know … He’s gonna walk out and see everything.” The billionaire later wrapped the footage by showing her dad sitting down across the yar. She said, “My dad is a barber so we put him in the barber chair.”

In the accompaniment of the post, Oprah gushed, “Giving my father his ‘flowers’ while he’s still well enough to smell them.” She then raved, “Happy 4th of July as you gather with your family and friends. Remember to celebrate each other.”

It remains to be seen what illness Vernon is battling. His famous daugher also has yet to offer more details regarding his medical condition.