Home » Celebrities » On the Rocks? Clare and Dale Are 'Working Through' Some 'Serious Issues' 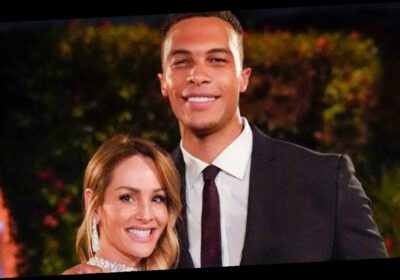 Every rose has its thorn. Clare Crawley and Dale Moss have hit a rough patch after getting engaged on season 16 of The Bachelorette.

“Dale and Clare are technically still together but there are serious issues they are working through,” a source tells Us Weekly exclusively.”They’re in communication but on a break.”

Crawley, 39, and Moss, 32, met while filming season 16 of the ABC dating series, which started production in July 2020 in Palm Springs. The hairstylist declared that she just met her “husband” after the football-player-turned-model walked out of the limo.

“It was breathtaking. It was one of those moments where you don’t know it until you experience it, what exactly that feeling is,” she told Us exclusively about meeting Moss. “I still can’t put it into words what that feeling is though. It was when your body has that kind of, like, a goosebumpy reaction to things; it just takes your breath away.”

As Crawley’s attraction to Moss grew, ABC opted to bring in Tayshia Adams to take over as the Bachelorette with the remaining contestants after just two weeks of filming.

Every Time the 1st Impression Rose Recipient Won ‘The Bachelorette’

“Who are these people to decide how long it takes somebody to fall in love? Is it a week? Is it a month? Is it a year? Is it two years?” Crawley told Us in October 2020 amid criticism that she fell for Moss too quickly. “How people fall in love and the amount of time that it happens or what the process is changes. It’s not for anybody to really decide if there is a cookie cutter for that.”

While some viewers have suggested Crawley and Moss spoke before shooting began she has denied several times that she reached out to him pre-filming.

“There was nothing against the rules of going on social media and looking at people’s [profiles]. I feel like I’d be doing myself a disservice to not do my research and look these guys up,” she told Entertainment Tonight about looking Moss up online. “He could be my future husband! I want to know what they’re doing in their off time in quarantine. I want to know what they’re keeping up with and what the type of content they’re posting — is it them partying? Is it them with a bunch of women? Or is it them with their family?”

Since getting engaged on the November 5, 2020, episode of The Bachelorette, the couple have continued their whirlwind romance, traveling to visit Moss’ sisters in South Dakota the same month and celebrating Thanksgiving with his family in La Jolla, California.

A month later, some fans were convinced that the pair had tied the knot after Crawley called the former athlete her “husband” in an Instagram Story. The reality star cleared up the mishap, saying it was a “slip of the tongue!”

Ahead of the new year, the couple gushed about their romance, with Moss commenting on his fiancée’s Instagram photo in December 2020, “Can’t wait for this new chapter!”

Crawley, for her part, noted that “2020 has no doubt brought some low lows” alongside a photo of herself in her hometown of Sacramento kissing Moss. “But it truly makes me appreciate the highs that it has brought to my life that much more,” she added.

Crawley previously competed for Juan Pablo Galavis’ heart on season 18 of The Bachelor. After two stints on Bachelor in Paradise, she got engaged to her Bachelor Winter Games costar Benoit Beauséjour-Savard in February 2018. They split that April.