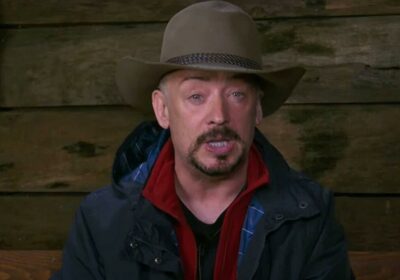 I’m A Celebrity…Get Me Out Of Here! hopeful Boy George isn’t one to hold back on his opinion and this week ranted about the dinner situation in camp. The 61-year-old branded current camp cook Charlene White “controlling” and complained that the mushrooms she put on the fire were undercooked.

His time in the jungle so far was discussed on This Morning earlier week, where former campers Vanessa Feltz and Matthew Wright shared their thoughts.

Vanessa claimed that the Culture Club star “doesn’t give a damn” and won’t be helping put with camp chores as she likened him to Madonna.

She told hosts Holly Willoughby and Phillip Schofield: “I’ve done so much reality TV so I know how it works, you try and get on with everyone.

“You want the people there to like you, the people at home to like you. If you don’t do the washing up at home, you try and do it there, you muck in.

“Boy George is not that person,” she added.

“The only other person I’ve ever worked with who is similar to him in not giving a damn about what anyone thinks about him is Madonna. Who can be equally as obnoxious is Madonna.”

Last night, the singer seemed to have turned over a new leaf as he backtracked on not wanting to be told what to do.

He had initially ranted to Scarlette Douglas about Charlene’s behaviour at meal time, but later asked if there was anything he could do to help.

Ahead of entering the jungle, George told ITV he was a “very positive person” who didn’t “bear any grudges”.

Of his role in camp, he said he’d be the “in-house dietician” who will reassure “everyone that they will be ok on a jungle diet”.

He went on to say he’d be the entertainer of the group and will sing for his fellow campmates.

“I am going to do impersonations of Shirley Bassey every day,” he claimed.

“I am going to put a song out whilst I am in the jungle too. I release music all the time. It’s good for people to discover music in a different way rather than through the approval system of radio.

“I don’t need to be approved by someone who hasn’t made a record.”

He went on to say he was looking forward to the experience.

The musician is reportedly earning £500,000 for his stint in the jungle.

Earlier this year, he joked he wouldn’t need to go on the show due to the success of Culture Club’s hit song Karma Chameleon.

After performing the track on Ant and Dec’s Saturday Night Takeaway, an intrigued Dec asked what the song was about.

He sassily replied: “It means I’ll never have to say I’m A Celebrity… Get Me Out Of Here!” which caused the pair to laugh.

The Culture Club star went on to say he’d sign up if there was a vegan version of the show.

I’m A Celebrity… Get Me Out Of Here! continues tonight at 9pm on ITV.