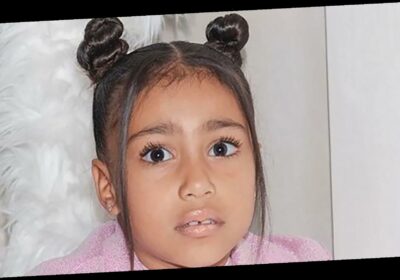 North West is receiving even more attention for her viral painting — but this time, it's coming from the Bob Ross estate.

After Kim Kardashian posted a photo of her daughter's Bob Ross-esque art class painting, the internet was quick to accuse Kim, saying it was too complex (and well done) for a 7-year-old to have painted. Turns out, though, it was part of an art class project that took North weeks to complete. Tracy Romulus, Kim's friend, also posted a picture of the same painting completed by her daughter, Ryan (North's friend and classmate). Further proving the painting's authenticity, the teacher's daughter even came out to clear Kim and North's names, showing the same painting she was taught to paint at 7 years old.

And now, it's garnering even more reactions, but a bit more positive this time. Sarah Strohl, from Bob Ross Inc., told TMZ that after discovering North's masterpiece, they want to help nurture her artistic ability. So they have invited her to visit the Bob Ross Experience in Muncie, Indiana.

Strohl said that everyone at Bob Ross Inc. was excited to see a younger generation continuing to be influenced by Ross's work and legacy.

The Bob Ross experience would allow North look at some of Ross's work up close and she'd receive a painting class in Ross's wet-on-wet technique with an instructor certified in the Ross style. Plus, the location of the experience is a refurbished studio that Ross used and filmed his series, The Joy of Painting, from 1983 to 1994.