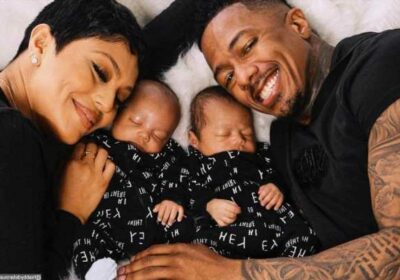 The former host of ‘Nick Cannon Presents: Wild N’ Out’ and his baby mama, who welcomed Zion Mixolydian and Zillion Heir on June 4, also share a cute photo of the newborns wearing a pair of headphones.

AceShowbiz –Nick Cannon is sharing his joy after welcoming twin sons. One month after welcoming Zion Mixolydian and Zillion Heir with Abby De La Rosa, the former host of “Nick Cannon Presents: Wild N’ Out” happily posed with his baby mama and their baby boys for their first family pictures.

Posting the photos in question was Abby on her Instagram page on Thursday, July 15. The first two snaps saw her and the 40-year-old comedian/rapper cuddling up to Zion and Zillion as they smiled ear-to-ear.

The last image, on the other hand, displayed both parents planting sweet kisses to their newborns. In the accompaniment of the post, she simply raved, “ONE MONTH OLD. ZION & ZILLION CANNON.”

Not stopping there, Abby turned to her Instagram Story to unveil one photo of the infants posing behind a turntable while donning a pair of headphones. The adorable snap was later reposted by her baby daddy on his own Instagram Story. 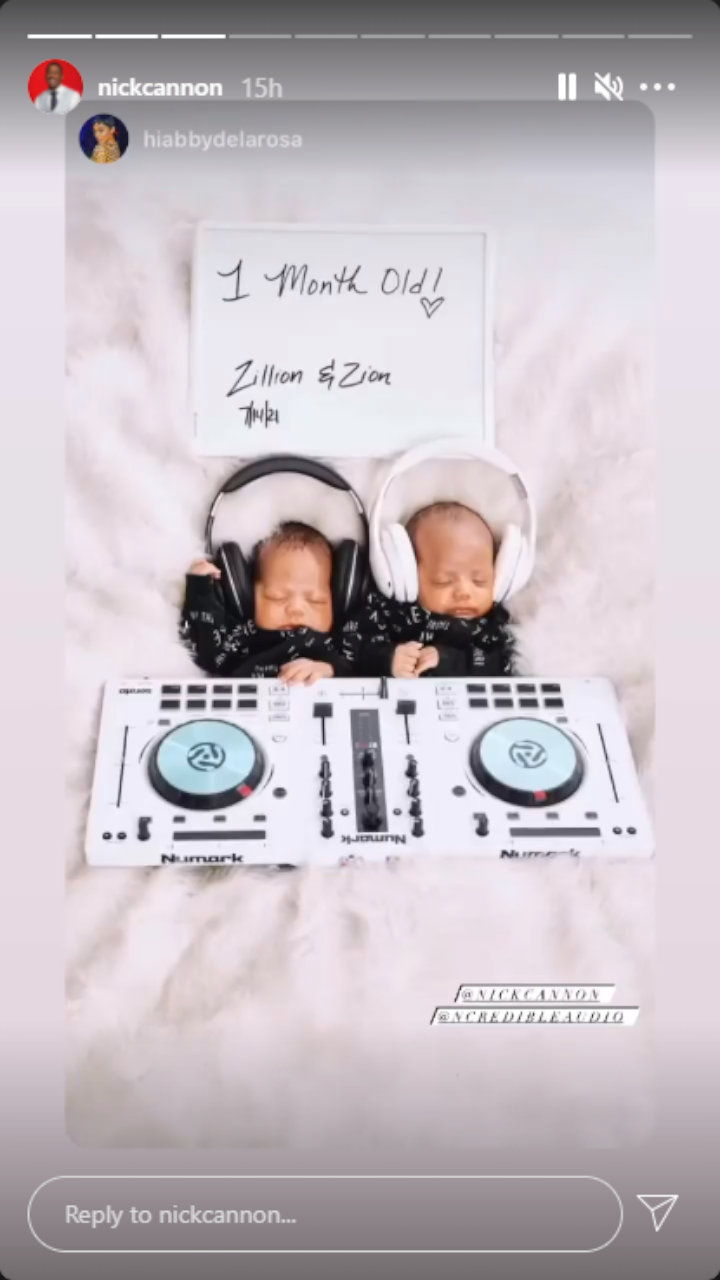 Nick and Abby welcomed baby Zillion and Zion on June 14. Sharing the happy news was Abby. Making use of Instagram, she let out a video of her holding her bundles of joy while sitting on a hospital bed. “JUNE 14TH, 2021. Welcome to the world Zion Mixolydian Cannon & ZIllion Heir Cannon. #Myworld #twinboys #ZionandZillion,” she captioned the footage.

Just days after Abby confirmed the babies’ arrival, model Alyssa Scott revealed that she’s expecting her first child with Nick. When celebrating Father’s Day, she shared on Instagram a picture of her and “The Masked Singer” host in which he put his hands on her growing belly.

Alyssa gave birth to the baby on June 21 and named him Zen. It took her more than a week to finally introduce her son to her Instagram followers. Alongside pictures of her cradling the tot, she penned, “I will love you for eternity… 6.23.21.”

Aside from the three babies, Nick is a father to 10-year-old fraternal twins Monroe and Moroccan, whom he shares with his ex-wife Mariah Carey. He also shares 4-year-old son Golden “Sagon” Cannon and 6-month-old daughter Powerful Queen Cannon with his model ex Brittany Bell.