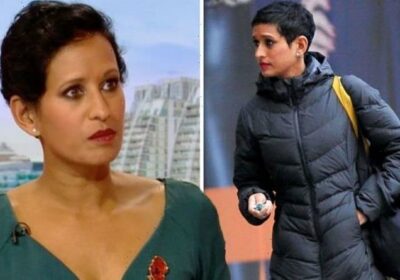 BBC Breakfast favourite Naga Munchetty, 46, has bid a fond farewell to her co-star Katherine Downes, 39, who recently announced “it’s time to move on” from the company. Katherine, who has worked at the BBC for 14 years, shared news of her decision to leave the broadcaster on Twitter last week.

However, the sports presenter admitted that she doesn’t want her time with the BBC to come to an end completely.

In a candid tweet, Katherine said she hopes the BBC will “have me back every now and then”.

In response, her colleague Naga insisted she was “always welcome”.

Naga retweeted Katherine’s post in view of her 262,000 followers, which read: “It’s given me the best of times and the best of friends.

“I hope they’ll have me back every now and then, but if you’re looking for a commentator/presenter/reporter, I’ll be free from the end of November…”

Naga then sweetly wrote back: “Always welcome my friend xx.”

Prior to sharing her hopes to make a comeback to the BBC in the future, Katherine told her 12,000 followers why she had decided to quit her role at the broadcaster.

She penned: “So proud to have broadcast from this sofa (and other BBC sofas…) for the last decade.

“From radio to TV, news to sport, the BBC has taken me on the biggest adventure and I can’t believe how lucky I’ve been.”

Katherine went on to admit the decision to leave wasn’t an easy one for her to make.

She concluded: “Not an easy tweet to write or an easy choice to make, but it feels like the time is right to try something new and I’m excited to see what else is out there.”

Elsewhere, Naga recently admitted “the best advice she ever received” was on her wedding day to husband James Haggar.

Opening up on her love life while speaking to The Big Issue’s Adrian Lobb for this week’s Letter To My Younger Self, Naga admitted: “The best advice I ever received was on my wedding day. An aunt in my husband’s family just said, ‘Be kind’.

“I know it seems trite now because everyone uses it. But this was 17 years ago.

“So be kind – because you never know what the other person’s going through.”

The star went on to say that she would also tell her younger self not to compromise in relationships, as she recalled being “so keen” for boys to like her when she was 16.