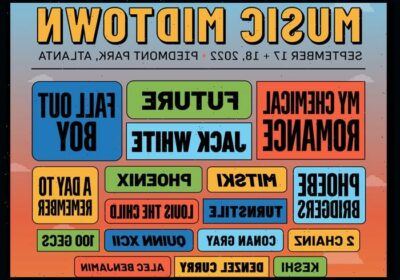 My Chemical Romance, Jack White and Fall Out Boy have been announced as headliners of this year’s Music Midtown festival.

Music Midtown is set to take place at Piedmont Park in Atlanta on September 17 and 18. Other musicians set to feature at the festival include Phoebe Bridgers, Mitski, Phoenix, Turnstile, A Day To Remember, Louis The Child, 2 Chainz, 100 gecs, Denzel Curry, Tinashe, and Charlotte Cardin.

Tickets for the event are on sale now.

“The Foundations of Decay” is the first new music from My Chemical Romance since the release of “Fake Your Death,” a song originally recorded for their unfinished fifth album but featured on the greatest hits compilation May Death Never Stop You in 2014.