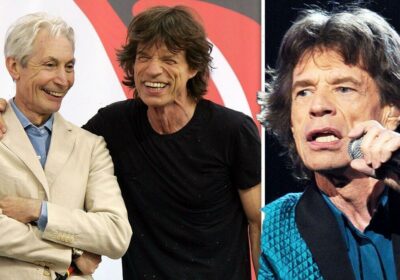 Mick Jagger has taken to Instagram to pay tribute to the Rolling Stones late drummer Charlie Watts on what would’ve been his 81st birthday. It comes as the Rolling Stones have embarked on the Spanish leg of their Sixty tour, having kicked off with a show in Madrid, Spain, last night.

In view of his 2.5 million followers, the rockstar paid tribute to their late drummer.

The star shared a black and white snap of himself hugging the drummer from behind during a performance.

In the throwback snap, Mick wore a white vest and had his eyes outlined in black makeup.

Smiling, Charlie affectionately leant into the singer as he sat behind the drums.

It comes after the musician’s death aged 80 on August 24 last year.

At the time, Mick described Charlie as the “rock” the band was built around, before acknowledging his unique contribution to their music.

Mick said: “The thing about Charlie was that he was always there, always played beautifully and was always willing to discuss what to do about it – how he could make it better.

“He held the band together for so long, musically, because he was the rock the rest of it was built around.”

The star went on to admit that he is still struggling with the death of his friend, adding that he’s finding the situation “very, very hard”.

Mick continued: “The thing he brought was this beautiful sense of swing and swerve that most bands wish they could have.

“We had some really nice conversations in the last couple of years about how all this happened with the band.

The songwriter told how he “loved to crack [Charlie] up”, adding that it could be “painful” with the drummer after his sense of humour had been “sparked”.

Following Charlie’s death, Steve Jordan has stepped in to play the drums on the band’s upcoming tour, with Mick branding the move a “respectful” one.

Charlie died weeks after revealing that he would not be touring with the band due to ill health.

The British rock band was formed in 1962 and was originally composed of Mick, Charlie, Keith Richards, Brian Jones and Dick Taylor, with Ronnie Wood not joining the group until 1975.