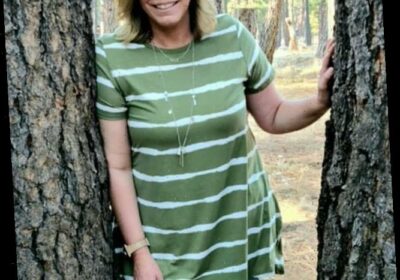 Not to her haters, however.

But, instead, to her most loyal and passionate supporters.

Over the past few weeks, the chorus has grown stronger than ever for Meri to walk away from her marriage.

Each new episode of Sister Wives appears to be make it clearer and clearer that this is not a healthy situation for Meri.

Just a few days ago on air, Kody flat-out admitted had had stopped trying to make things work with his first spouse.

Prior to that confession, Kody said he felt “distant” from the mother of one and added of the romance:

“You know, I could buck up, put my backpack on and go for a run, be tough about it, but I’m just not interested in it.”

So… what the heck, Meri?

Why not walk away? Why not start over? Why not even see if you can star in your own spinoff, as many followers have been angling for?

Brown is seemingly aware of the concern for her that’s out there, and she seemingly addressed it on Wednesday via photograph of herself smiling and a caption that can best be summed up as follows:

To open her post, Meri shared a quote that obviously referenced Kody’s self-proclaimed low opinion of her:

“‘I know my value, anyone else’s opinion doesn’t really matter’ — unknown,” it reads.

“That I know what my convictions are.”

Brown has been more outspoken than usual of late, granting multiple interviews in which she emphasized her committment to Kody… no matter how poorly he treats her.

“I know I’m a strong and capable woman, capable of making her own decisions, not based on money, not based on religion, not based on feelings,” added the long-time Sister Wives cast member.

Meri is trying to walk a fine line of being grateful for those who want her just to be happy — and also being annoyed by the condescending nature of anyone who makes any presumptions about her life.

I get “to make my own choices and decisions,” she wrote, going on as follows:

“I understand that many of you give your advice to me based on YOUR values, YOUR life experiences, YOUR perspective of me. I hope you understand that each person has their own set of values and standards they live by.

‘You have yours, I have mine.”

Meri just asks that you respect her as an individual.

Yes, even if this means ignoring what you see on scrreen and what you think this means about the state of her marriage or satisfaction.

“Just because mine are not the SAME as yours does not mean I lack in self love, self worth, self esteem, or make me a fool,” she concluded.

“Yes these are labels many try to place on me on a daily basis.

“And I assure you, that is not the Meri Brown that you think you know.”