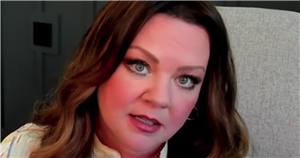 Melissa McCarthy has dished out all the details on what it was like to work with Prince Harry and Meghan Markle on her birthday video.

The Duchess of Sussex shared a hilarious clip for her 40th birthday with the Hollywood actress to urge 40 friends to donate 40 minutes of their time to help mentor women going back into the workforce.

Her husband Harry, 36, even made a cameo in the footage as he was seen walking past the window in the background juggling before smiling at this other half and quickly disappearing.

Now, Melissa, 50, has opened up on the experience of working with the royals as she told Access Hollywood: “She's [Meghan Markle] doing such an amazing thing to celebrate her 40th.

The Bridesmaids actress continued: “I just love that she is like, 'Oh, what can I do to put some good and help some people out?' Well that is awfully nice.

"Then in comes Harry and he's like, ‘I can juggle’… Then he's like, 'Is it going to be weird if I stand outside and juggle?'

"I was like, ‘Weird in a way that will make me watch it five million times!’” she giggled.

Former Gilmore Girls star Melissa went on to gush over the couple, who share son Archie, two, and newborn daughter Lilibet together, as they're finding their own way following their exit from the Royal Family.

Melissa added: “The way she wants to celebrate her 40th is by helping and empowering other women.

"How do you not get behind that? They don't take themselves too seriously.

“She said, ‘let's do it in a fun way and see if we can drum up more people helping more women kind of get back into the workforce’… I was so pleased to be a part of it."

In the video, the Duchess told Melissa: "It's my 40th birthday and I've got an idea, because I'm turning 40, I'm asking 40 friends to give 40 minutes of their time to mentor a woman who is remobilising back into the workforce.

"Over 2million women in the US alone and tens of millions around the world have lost their jobs due to Covid.

"And I think if we all do it, and all commit 40 minutes to an act of service, it can have a ripple effect."

For all your updates on Meghan Markle and the Royal Family, sign up to our daily OK! newsletter.