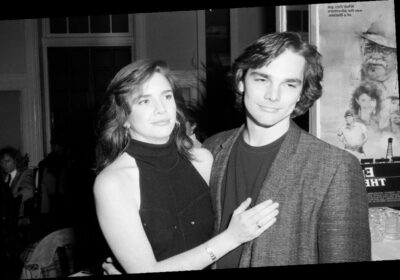 Little House on the Prairie star Melissa Gilbert got engaged to playwright Bo Brinkman after knowing him for six weeks. They had a short engagement and got married at city hall with only a handful of friends present. Even before they got married, Gilbert and Brinkman knew they wanted to start a family sooner rather than later. After trying for several months, Gilbert learned she was indeed pregnant. But only after Brinkman accidentally gave her a black eye.

When Gilbert was about 24, she turned her attention away from doing theatre to shoot a TV movie called Killer Instinct and then “focused on getting pregnant,” she wrote in her memoir, Prairie Tale.

“Each month, I thought I would end up pregnant, and then I would not see a line in the pregnancy test and ball up with disappointment,” she wrote.

Eventually, Gilbert stopped “focus[ing]” so hard and returned to acting. She was performing in a play at her husband’s theatre company when she had a “funny feeling that something might be stirring inside me.” But because she’d been disappointed so many times before, Gilbert sat on her premonition. She was also distracted by the show.

The play Gilbert was in was a series of one-acts. The one she was in was called, Big El’s Best Friend, about two roommates who were obsessed with Elvis Presley. Susan Astin and James Gandolfini were also cast and they had “a great old raucous time together.”

“Such a sweet group of people—until everyone started to drink,” wrote Gilbert. “At one point, we referred to ourselves as the black-eyed production. Everyone had a black eye. Susan and Jim had gotten in a fight and given each other shiners. Bo had brawled with someone on the street. One of the actors in one of the other plays had walked into an open kitchen cupboard.”

Gilbert ended up with a black eye, too.

“One night when Bo and I were sound asleep, he bolted upright, screamed ‘Get away from me,’ and elbowed me square in the eye,” she wrote. “I’d never been struck like that before, and though dizzy with pain, I still had the presence to shriek, ‘Thank God it wasn’t my nose!’” (Gilbert has quite the history with nose jobs.)

Just after the elbow incident occurred, Gilbert took her “black-eyed self” to the doctor for a blood test. It was at this doctor’s visit where she was confirmed pregnant.