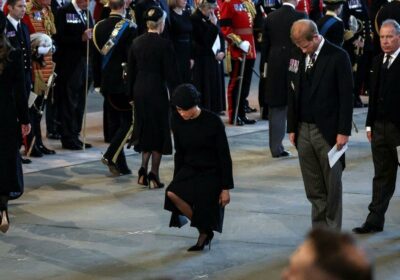 The royal family gathered to show their respect for the lateQueen Elizabeth IIat a service at Westminster Hall to commence the lying in state,which precedes the Queen's state funeral on 19 September.

Before departing from the service, theDuchess of Sussexwas seen taking a deep curtsy before her grandmother-in-law’s coffin.

Traditionally, women in the royal family curtsy if they're seeing the monarch for the first time that day, while men usually greet the monarch with a head bow.

Meghan has previously spoken about her shock at having to learn how to curtsy very quickly – and how she ended up doing a 'very deep' curtsy.

Being interviewed byOprah Winfrey, Meghan said: “I remember Harry and I were in the car, and he says, 'OK, my grandmother is there so we're going to meet her,'. And I said, 'Oh great, I love grandmas.' […] 'But, right, do you know how to curtsy?’

“That was really the first moment that the penny dropped that this wasn't easy,” she added.

The Duchess says that she then had to quickly learn how to curtsy, with help from Prince Harry andSarah Ferguson, the Duchess of York.

The former actress continued: "I learned it very quickly, right in front of the house, we just practised and then walked in. […] I met her and, apparently, I did a very deep curtsy."

At the short service at Westminster Hall, the Duke and Duchess of Sussexcould be seen holding handsas they departed.

While many other royal couples departed side by side without touching, the Duke and Duchess were not the only pair to break from expected protocol.

Zara Tindall and her husband Mike Tindallalso held hands as they departed the solemn occasion.

Following the end of the service the Queen’s coffin will lie in state until the morning of her funeral.

Hundreds of thousands, if not millions, of people are expected to visit the Queen’s coffin with queues potentially lasting for hours.

During this time soldiers dressed in ceremonial uniform will be maintaining a constant 24 hour vigil around the Queen’s coffin.

The Queen will remain here until 6.30am on Monday September 19, when the coffin will be taken to Westminster Abbey for her state funeral.

After the funeral she will travel to Windsor Castle, where she will be laid to rest in St George’s Chapel alongside her beloved late husband, Prince Philip.