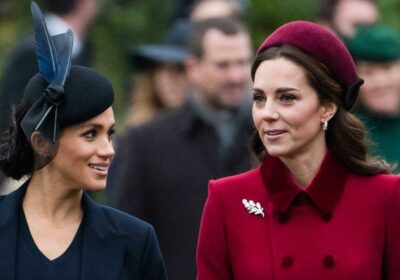 The royal family made the journey to Westminster Hall to pay their respects to Queen Elizabeth II, with the royal ladies marking their respect upon exit.

Meghan Markle and Princess Kate both curtseyed as they passed the coffin, with Meghan performing a deep curtsy – one of her last ones for her grandmother-in-law. Royal ladies normally curtsy if they’re seeing the monarch for the first time that day, and men’s greeting is normally a neck bow.

Prior to her curtsy, the Duchess was holding hands with her husband Prince Harry, though they unclasped as Meghan showed her respect to the late monarch.

The Duchess of Sussex spoke previously about the moment she met the Queen for the first time during her and Prince Harry‘s interview with Oprah Winfrey.

Recalling the moment she met the monarch for the first time at The Royal Lodge in Windsor, Meghan shared her surprise when she learnt she had to quickly perfect the art of curtsying.

“Right in front of the house we practiced and ran in,” she recalled. “Fergie ran out and said, ‘Do you know how to curtsy?’ Apparently, I did a very deep curtsy, I don’t remember it, and then we sat there, and we chatted.”

While that particular meeting was private, cameras caught the moment Meghan curtsied to the Queen for the first time in public during her first Christmas with the royal family in December 2017.

Since then she has curtsied for Her Majesty many times, with today’s being one of the most poignant.