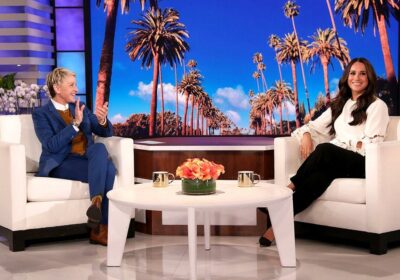 The Duchess of Sussex has revealed her children’s adorable Halloween costumes as she spoke about how her family celebrated this year.

Speaking on The Ellen DeGeneres Show, which airs on Thursday, Meghan said: “We wanted to do something fun for the kids but the kids were just not into it at all. Archie was a dinosaur for maybe five minutes…”

Ellen, who joined the Sussexes for the annual holiday, replied: “No, not even for five minutes, finally Harry talked him into having the head on, but Lili was a skunk.”

Meghan laughed and added: “She was a little skunk… like Flower from Bambi.”

The Duchess also spoke about one of her early dates with her husband, Prince Harry, when he joined her in Toronto.

She revealed how they went incognito to a post-apocalyptic themed Halloween party with Harry’s cousin, Princess Eugenie, and her future husband, Jack Brooksbank, before Harry and Meghan’s romance was confirmed to the world.

“The four of us just snuck out in Halloween costumes to just have one fun night out on the town before it was out in the world that we were a couple,” Meghan said.

Ellen asked: “So you went with Harry to a Halloween party and they had no idea it was the two of you?”

Meghan added: “It was a post-apocalypse theme. So we had all this very bizarre costuming on and we were able to just sort of have one final fun night out.”

The Duchess will also speak about life before marrying Harry

During her first TV interview since having daughter Lilibet in June, the Duchess and former actress will talk about her return to the Warner Bros. lot – familiar to her from auditions she attended in the past – but also opened up on life with a young daughter.

In the interview, Ellen, who is Meghan and Prince Harry’s Montecito neighbour, reveals that “Lili’s now teething” before Meghan jokes that she is looking for ideas to help relieve the pain to which Ellen replies: “Tequila, anything.”

Make sure you never miss a ROYAL story! Sign up to our newsletter to get all of our celebrity, royal and lifestyle news delivered directly to your inbox.