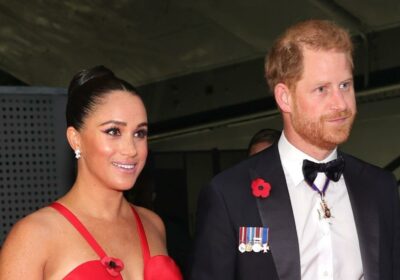 The Duchess of Sussex made a surprise appearance alongside her husband, Prince Harry, as the couple attended their first red carpet since stepping back as senior royals.

MORE: The real reason why Prince Harry and Meghan Markle are not on social media

Meghan joined Harry at the Intrepid Museum’s 2021 Salute to Freedom gala in New York on Wednesday night, where the Duke presented the inaugural Intrepid Valor Awards to five service members, veterans and military families “living with the invisible wounds of war”.

The Duke looked smart in a black tuxedo, while the Duchess wowed in a show-stopping fire-engine red gown by Carolina Herrera and shoes by Giuseppe Zanotti.

The mother-of-two – who welcomed daughter Lilibet Diana in June – stole the show as she arrived on board the historic aircraft carrier Intrepid in her gorgeous gown which featured a deep neckline, with a pleated skirt and thigh-high split that ran up the middle of the gown.

She accesorised with a diamond tennis bracelet once owned by Princess Diana, as well as a poppy to honor Veteran’s Day in the US and Rememberance Day in the UK.

She wore her hair in a chic updo that showed off her natural makeup.

The event, held aboard the historic aircraft carrier Intrepid, comes the day before Armistice Day in the UK, known as Veterans Day in the US.

During the ceremony, Harry was also reunited with rock star Jon Bon Jovi, who received the 2021 Intrepid Lifetime Achievement Award for his work as chairman of the Jon Bon Jovi Soul Foundation.

The organisation focuses on breaking the cycle of poverty and homelessness through affordable housing and shelter, including permanent supportive housing for veterans.

The frontman teamed up with Harry in February 2020, as he recorded a charity single, Unbroken, for the Duke’s Invictus Games Foundation.

The Duke served in the Army for ten years, during which time he carried out two frontline tours of Afghanistan.

Make sure you never miss a ROYAL story! Sign up to our newsletter to get all of our celebrity, royal and lifestyle news delivered directly to your inbox.