Home » Celebrities » Meghan Markle: Did She Get Piers Morgan Fired?!

Meghan Markle: Did She Get Piers Morgan Fired?! 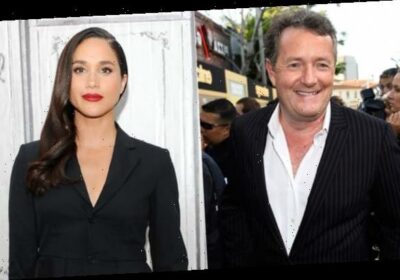 As you’ve no doubt heard by now, Meghan Markle’s interview with Oprah made major waves this week, and it seems to have made life very uncomfortable for some very powerful people.

Obviously, the British Royal Family has suffered the brunt of this incredibly satisfying PR crisis, but they’re not the only stodgy nerds who are finally being called out for disguising their bigotry as a devotion to tradition.

Take, for example, Piers Morgan who has the dubious distinction of being the first person to lose his job as a result of Meghan’s interview.

Earlier this week, we reported that Piers quit his hosting gig on the UK’s ITV as a result of an on-air argument about his never-ending obsession with Meghan,

In case you weren’t aware, Piers and Meghan went on a date (at least he calls it a date) like a decade ago; she ghosted him, and he never got over it.

Anyway, it turns out the decision to replace Piers with a less toad-like host might have been made by the Morgan’s bosses.

According to a new report from CNN, Meghan filed a formal complaint with ITV after Piers berated her Monday morning in response to her Sunday night interview.

“Meghan’s complaint to ITV concerned the impact Morgan’s comments could have on others and how it could degrade the seriousness of mental health issues,” the outlet reports.

“The complaint did not relate to the personal nature of Morgan’s attacks.”

In all likelihood, the complaint focused on Morgan’s reaction to claims that Meghan didn’t want to live anymore during the darkest days of her life in London.

Apparently, it’s not a good look for the host of a popular morning show to make light of suicidal depression.

“I don’t believe a word she says, Meghan Markle,” Morgan said on Monday.

“I wouldn’t believe it if she read me a weather report and that fact that she fired up this onslaught against our royal family, I think is contemptible.”

On Tuesday, Morgan stormed off set during a panel discussion in which a co-host called him out for his obvious obsession with Meghan.

Shortly thereafter, Piers issued a statement revealing that he would not be returning to Good Morning Britain.

So did he already know he was soon to be fired, and the producers allowed him to storm off set for one final installment of Piers’ Pettiness Theater?

Or was his little fit the final straw that led his bosses to kick him to the curb?

Either way it’s a fitting end to one of the most obnoxious careers in modern journalism.

In all likelihood, Piers believes he has a wide array of options with regard to the next step in his career.

But he may find that mocking a pregnant woman of color for opening up about the racism she’s endured might not exactly endear him to potential employers.

With any luck, Piers’ little temper tantrum will turn out to be his final newsworthy moment.

Pettiness and spite have defined Morgan’s career, so it’s only fitting that they should bring about its end.