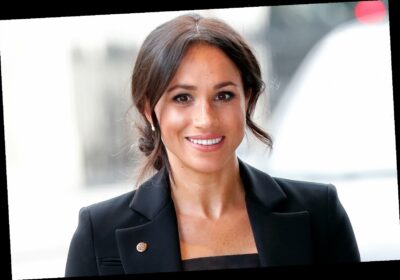 Meghan Markle may have just recently announced the sex of her second child with Prince Harry, but she's had a special gift ready to be passed down to her baby girl on the way for years.

In a 2015 interview with Hello! magazine, the Duchess of Sussex revealed that she once splurged on a Cartier watch to celebrate her TV show Suits with the intention of turning it into a family heirloom.

"I've always coveted the Cartier French Tank watch," she explained. "When I found out Suits had been picked up for our third season — which, at the time, felt like such a milestone — I totally splurged and bought the two-tone version."

According to Meghan, she even had a personalized message engraved on the jewelry piece.

"I had it engraved on the back, 'To M.M. From M.M.' and I plan to give it to my daughter one day," she said. "That's what makes pieces special, the connection you have to them." Meghan and Harry revealed they are expecting a baby girl — a little sister for her son Archie Harrison — during their sit-down interview with Oprah Winfrey on Sunday.

"To have a boy then a girl — what more can you ask for?" Harry said during the TV special.

The couple added that they will not be having anymore children following their baby girl's arrival, saying, "Two is it."

"Grateful, having any child, any one or a two would have been amazing, but to have a boy and then a girl … now we've got our family and we've got four of us," Harry said.

Meghan and Harry first announced the pregnancy in February with a stunning black-and-white photo that was taken remotely via iPad by their friend and longtime photographer, Misan Harriman.

In the picture, Harry looks lovingly at Meghan as she cradles her baby bump while wearing a Carolina Herrera that was first made when she was pregnant with Archie, who will turn 2 on May 6.

The happy news — which they shared on Valentine's Day — came after Meghan revealed she suffered a miscarriage last July. "Losing a child means carrying an almost unbearable grief, experienced by many but talked about by few," she wrote in a searingly honest and heartbreaking New York Times essay on November 25. A source close to the couple recently told PEOPLE that Meghan and Harry were "hopeful that they would get pregnant again. And they were overjoyed that it happened so quickly."

Still, after the "devastating" miscarriage, "they were both nervous, and it took them a while before they could relax and fully enjoy this pregnancy," the source said.

"They always wanted for Archie to have a sibling close in age," the insider added.