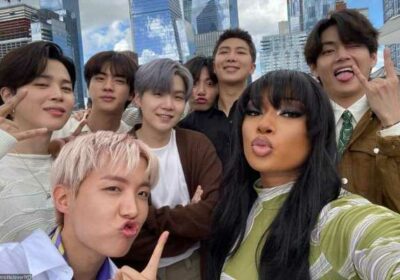 The ‘Hot Girl Summer’ hitmaker shares the photos just one day after the famed K-pop group performed their hit single ‘Permission to Dance’ at the United Nations.

AceShowbiz –Megan Thee Stallion has a special treat for her social media followers. Nearly one month after she dropped her BTS (Bangtan Boys)’ “Butter” Remix, the “Hot Girl Summer” hitmaker let out some selfies with the famed K-pop group.

The 26-year-old Houston native shared the snaps in question on Instagram on Tuesday, September 21. While some photos saw them hanging out on a rooftop during a sunny day in New York City, another displayed the boyband hanging out with one of her French bulldogs, 4oe. In the caption, she penned, “It’s Thee HotGirl Coach and BTS @bts.bighitofficial.”

The pictures were taken just one day after BTS performed their hit single “Permission to Dance” at the United Nations for the organization’s 76th General Assembly. The group also advocated for COVID-19 vaccinations in addition to climate change solutions.

Megan and BTS’ first collaboration “Butter” Remix was released on August 27. In the remix, Megan brags about her success in the music industry by rapping, “Ayy, so smooth like the car I ride/ Even ya best party planner couldn’t catch this vibe/ Big boss, and I make a hater stay on they job.”

“And I be on these girls necks like the back of they bobs/ Houston’s finest, in the room with bosses/ Make ’em all get ratchet in they suits and blouses,” the Grammy winner continues. “I remember writing flows in my room in college/ Now I need global entry to the shows I’m rocking (Yeah).”

Megan was initially blocked by her label 1501 Certified Entertainment from releasing the track, prompting her to file an “emergency relief.” Luckily, she was granted permission by a judge.

Having been cleared to release the song, the “Good News” artist expressed her excitement on Twitter. “Y’all don’t even understand how excited I am,” she simply wrote.