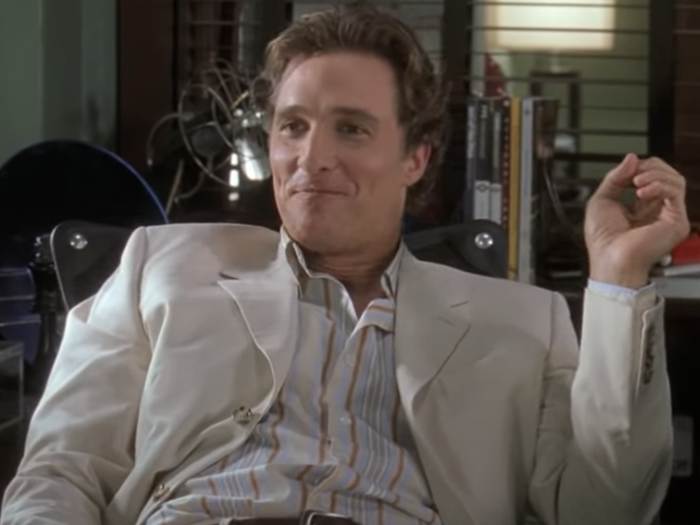 Matthew McConaughey gave "How to Lose a Guy in 10 Days" fans hope for a sequel.

Despite the fact that McConaughey made a conscious decision to shift from romantic comedies to more serious projects in 2010, he said he hasn't ruled out revisiting his character from the popular 2003 movie.

When asked if he'd be willing to reprise his role on Monday's episode of E!'s "Daily Pop," he responded, "Possibly."

In the 2003 film, the 51-year-old actor starred as an advertising executive named Ben who unexpectedly falls for a magazine columnist named Andy (Kate Hudson).

The movie, which is based on a book of the same name by Michele Alexander and Jeannie Long, became an immediate fan favorite and grossed over $177 million globally, according to IMDb.

McConaughey, who appeared as the lead love interest in films like "Fool's Gold," "The Wedding Planner," and "Ghosts of Girlfriends Past" in the early 2000s, has reflected on the period of his career when he was primarily focused on rom-coms.

He continued, "For me personally, I enjoyed being able to give people a nitty-minute breezy romantic getaway from the stress of their lives where they didn't have to think about anything, just watch the boy chase the girl, fall down, then get up and finally get her. I had taken the baton from Hugh Grant, and I ran with it."

And though McConaughey wrote that he "enjoyed making romantic comedies, and their paychecks rented the houses on the beach I ran shirtless on," he committed to making a change in his career trajectory.

"I declined the offer," he wrote in his memoir. "If I couldn't do what I wanted, I wasn't going to do what I didn't, no matter the price."

Since then, he hasn't appeared in another romantic comedy.

Instead, he's taken on a variety of projects outside of the genre, including "Mud," "Interstellar," and "The Gentleman." And, in 2014, he won his first Academy Award for his performance in "Dallas Buyers Club."

It's been 17 years since "How to Lose a Guy in 10 Days" premiered, and McConaughey isn't alone in reminiscing about the 2003 hit.

His co-star Hudson recently shared that she frequently thinks about the on-screen characters' fate.

"I've always thought about what Matthew and I's characters would be now, if we were still together. It's actually probably a good amount of time [that has passed] to make a movie about it. We probably would have gotten married with kids. We're probably miserable right now," she told Elle.