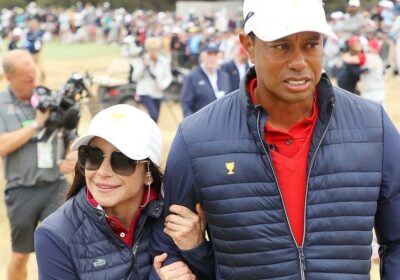 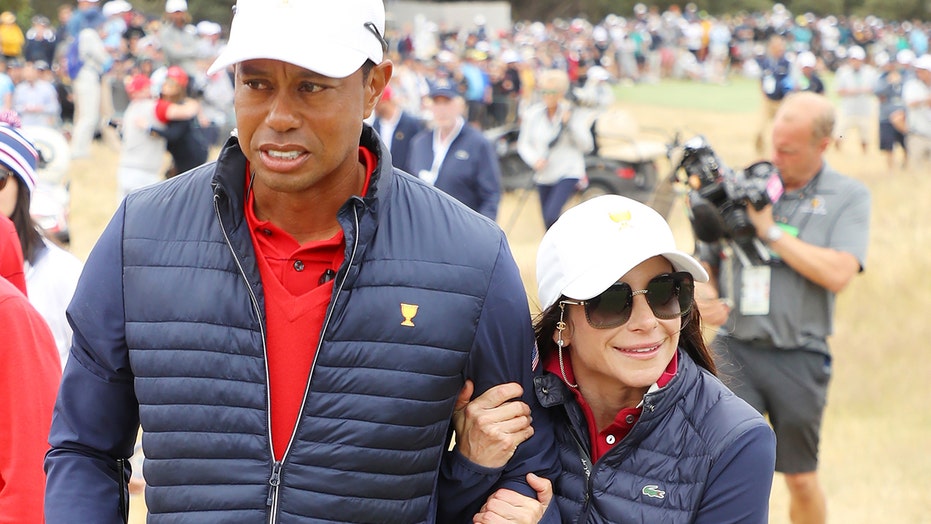 OutKick founder Clay Travis breaks down the chances of the golf legend performing well in the Masters a year after his serious car accident.

As Tiger Woods prepares to embark on another historical milestone to secure his sixth green jacket with a Masters win at Augusta National Golf Course this weekend, many fans of the power swinger will be watching along to see how his longtime girlfriend, Erica Herman, will be cheering him on to victory.

Woods is set to walk the sprawling greens and fairways just 14 months after surviving a frightening rollover car crash in February 2021 in Rancho Palos Verdes, California. 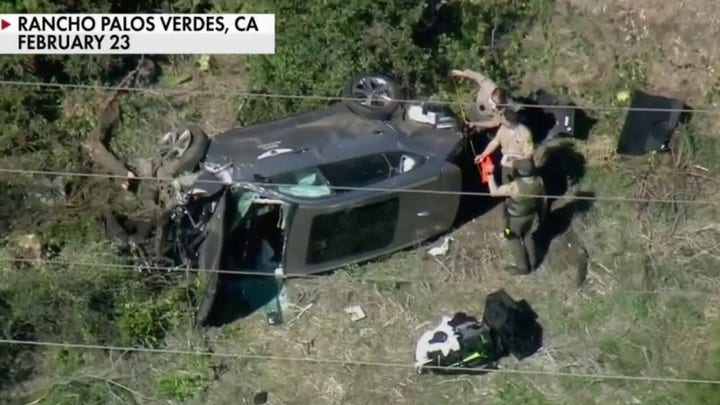 Athletes, politicians and celebrities from across the sports world reacted to Woods’ injury in the immediate aftermath.

Immediately following the crash, it was Herman who rushed to Woods to aid in his daunting recovery.

“Erica dropped everything to be with Tiger the moment she heard what happened,” a source told Us Weekly in March 2021. “She’s been by his bedside, holding his hand and telling him everything’s going to be OK. He’s a champ and he’s got this.” 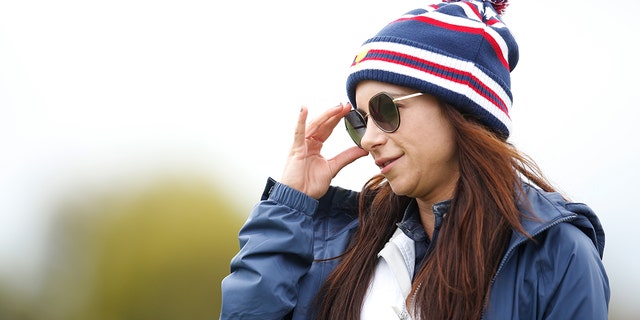 It was at the President’s Cup in September 2017 that Woods, 46, and Herman, 37, went public with their relationship. The world quickly became enamored with Herman after Woods won the Masters in glorious fashion in 2019 and planted a huge kiss on Herman to cap off his fifteenth major title victory.

At the time, Woods’ pal Arjun Atwal told Page Six that Herman, is “100 percent supportive, when he was down with his health and all that stuff,” and added, “it’s not like he has a bunch of people around. She was right there for him.” 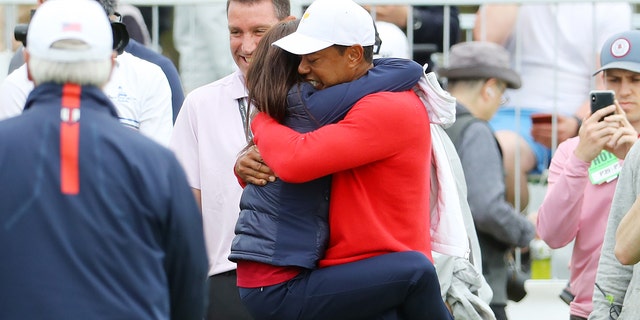 The pair met when Herman was studying political science as an undergraduate student at the University of Central Florida in Orlando.

Despite Herman’s connection to Woods, some folks further relayed to the outlet that they were often “scared to get too close” to Herman after Woods opened his own restaurant in Jupiter, Florida in 2015 and appointed her as his director of operations.

“She decorated during the Christmas season — and she’s Jewish. So she had the silver and gold ornaments and was wrapping presents, which everyone thought was very funny,” Luke Copeland, who worked as a server assistant at The Woods in 2015 and 2016, told Page Six, adding that Herman was “very direct” but readily accessible nonetheless. 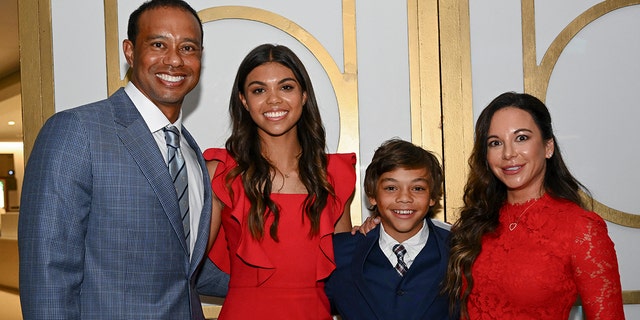 Additionally, Woods’ ex-wife, Elin Nordegren, is said to be in full support of Herman’s relationship with Woods – as are Woods’ children: daughter Sam, 14, and Charlie,  who at just 12 years old is already a golf star in his own respect outside of his father. 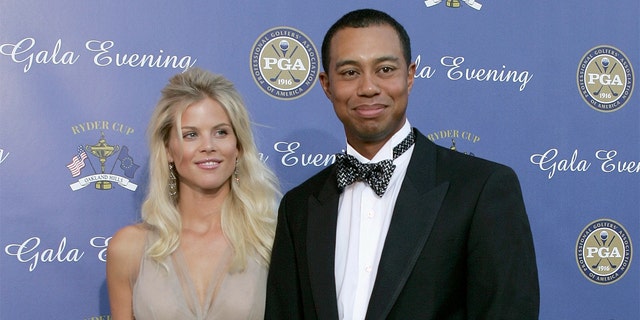 “Elin has a friendly relationship with Erica,” a source told People magazine in January 2019. “Tiger has come a long way and Elin acknowledges that. She is happy that he is dating Erica.” 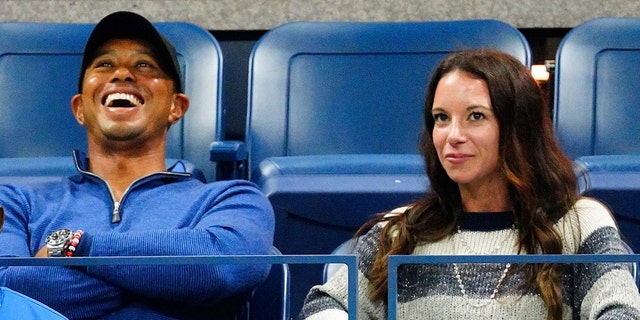 Tiger Woods and Erica Herman cheer on Rafael Nadal at 2019 US Open in New York City.
(Photo by Gotham/GC Images)

On Tuesday, Woods was asked whether he thinks he could win this weekend. His simple response: “I do.”

“I can hit it just fine. I don’t have any qualms about what I can do physically from a golf standpoint. Walking is the hard part,” he added. “This is normally not an easy walk to begin with. Now given the conditions that my leg is in, it gets even more difficult. Seventy-two holes is a long road and it’s going to be a tough challenge. And a challenge that I’m up for.” 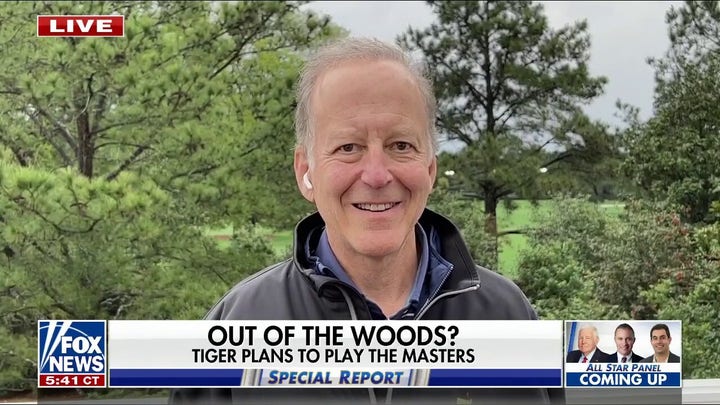 Woods played another nine holes during a practice round on Wednesday in preparation for the historical feat of chasing Jack Nicklaus’ majors record. Nicklaus has 18 major titles and Woods has 15.

As of now, he is set to tee off at 10:34 a.m. ET on Thursday with Louis Oosthuizen and Joaquin Niemann.