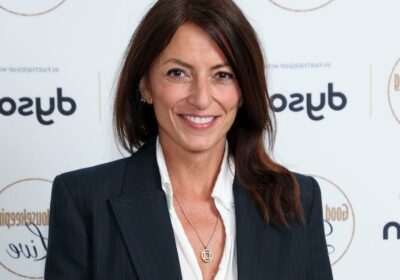 The presenter, 55, appeared on the judging panel of the celebrity singing show as it returned for a new series on New Year’s Day.

However, that wasn’t the only thing that was new as Davina sported a brand new ‘do, opting for a blunt fringe on her brunette locks.

The star took to Instagram after the episode to share details of the outfit she wore, which featured a neon orange dress and strappy stiletto heels.

The new fringe marked a striking departure from Davina’s usual hairstyle – but it isn’t here to stay, as revealed by Davina’s partner and hair stylist Michael Douglas.

Davina shared a photo of her and co-host Rita Ora on the show, as well as a clip of her partner Michael doing her hair ahead of filming, which revealed the dramatic look was actually a wig.

Despite the new hairstyle not being Davina’s real hair, many fans loved the transformation.

One person wrote: “This look is sexy ! Reminds me if the early 00s. Power woman”.

Another person added: “She looks absolutely fantastic”, while another said: “Davina looks amazing”.

In the first episode, Chris Kamara, 64, was revealed as Ghost as the fourth series of the hit ITV show returned.

The first episode saw Knitting, Jellyfish, Otter, Ghost, and Cat & Mouse and Phoenix battle it out in pairs to try make it through to the next round.

Davina and Rita are back as judges on the show alongside Jonathan Ross and Mo Gilligan, who were all left stunned when Chris removed his mask to reveal a black skeleton one-piece underneath.

After learning who was behind the mask, Rita gushed over Chris' performance – and even requested a duet in the future.

Clearly flattered at the offer, he replied: “I’d love that!”

Talking about why he took part in the show, Chris said: “I did it for the grandkids. I want to see the surprise on their faces when they see me unmasked on the show.

"Not even my wife knows so it’s going to be a surprise for the whole family.

"I’m not the best at keeping secrets so I’m not sure what will shock them most, taking part in the show or keeping it a secret."