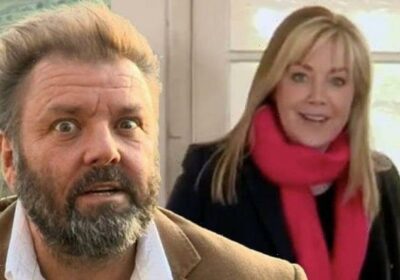 Martin Roberts and Lucy Alexander are on Celebrity Catchpoint

Martin Roberts, 58, has presented on BBC’s Homes Under the Hammer since the programme began in 2003. His TV wife, Lucy Alexander, 51, left the show in 2016, to focus on other opportunities.

I loved our time together.

Speaking to Express.co.uk, Martin revealed whether he thought Lucy would be welcomed back to the show.

Asking Martin if Lucy would come back to the show, he replied: “I’m sure she would.

“Would she be allowed back on the show? I don’t know.”

He continued: “I mean she left because she wanted to pursue other avenues.

“I loved our time together and I was very very sad to see her leave.

“Whether or not the ship for her has sailed, I’m not in charge of production.

“I would obviously welcome her with open arms and I know the viewers really really loved Lucy.”

Martin is still close to Lucy having worked opposite her on TV for 13 years.

Speaking about their relationship, Martin said: “Obviously I worked with her for 13 years, she was my TV wife.

“I don’t see her very often but when we do it’s lovely.

“We email each other at significant events so not very often but when we do it’s always lovely.”

Lucy shared clips of the meeting to her Instagram story earlier this week.

The first of the videos was a clip of her and her co-stars messing around on set.

The co-stars were Martin Roberts, Louise Minchin and Mike Bushell.

She captioned the video: “Me and Martin V Louise Minchin and Mike Bushell from BBC Breakfast.

Speaking about the filming of the show, Lucy was upset as she could not hug Martin on set.

She said: “The really weird thing is, I haven’t seen Martin Roberts, from Homes Under the Hammer, my co-presenter for about a year and a half.

“I’m not allowed to go up and give him a hug because of the Covid restrictions,” she said.

The star then concluded, saying: “So when we’re finished I might.”