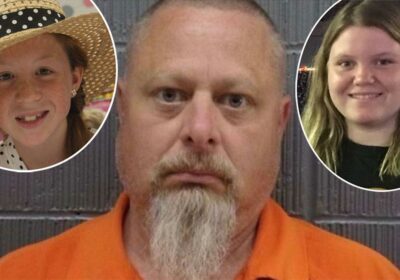 A suspect has finally been charged with the murder of of two teen girls in Delphi — over five years after their deaths.

If you’ve been keeping up with the case, you know it’s been a painstaking process trying to link a name to the tragic murders of 14-year-old Liberty “Libby” German, and 13-year-old Abigail “Abby” Williams. If you don’t remember, the two were dropped off at the Delphi Historic Trails in Delphi, Indiana by Libby’s older sister on February 13, 2017. After capturing some grainy footage from Monon High Bridge Trail of a man walking toward the teens, muffling, “down the hill,” the girls were never seen alive again. Their bodies were later found about a half a mile from the trail on the bank of Deer Creek, and police quickly identified their causes of death as homicide, but have been tight lipped when it comes to specifics.

Then, in December of 2021, Indiana State Police began investigating the victims’ correspondence with with social media user anthony_shots between 2016 and 2017, which was soon discovered to be run by Kegan Kline, a man who allegedly used photos of a male model to catfish and solicit nude images and videos from underage girls. As it stands, Kline is currently in prison on 30 charges, including child exploitation, possession of child pornography, and child solicitation for sexual intercourse. The man had previously denied having anything to do with the murders of Libby and Abby, explaining in a leaked transcript on the Murder Sheet podcast from a police investigation that while he had indeed been in contact with the underage girls, he never arranged for a meeting, and wasn’t even in Delphi that fateful day. He then claimed he wasn’t the only one with access to the catfish account, however, it was later revealed that he supposedly failed a polygraph test regarding his denial of information about the murders. He allegedly later looked up “how long does DNA last?”

No solid evidence actually linked him the murders, and footage that could have placed Kline in Delphi on the day of the killings, contrary to his own claims of being out of town, was lost by the FBI. However, another development in the case came when Indiana State Police began searching an area of the Wabash River in Peru, Indiana. Now, an arrest has FINALLY been made, and it’s VERY surprising.

“Peace came over me — and I didn’t expect that to happen.”

He added he hopes the families “have found some peace in this complicated world,” but urges the public to “please continue offering tips” as the investigation continues. Carter told ABC News that over 70,000 tips have already been received, noting, “the eyes of America were on this.” He added:

“We committed a long time ago this day would come. Evil never wins.”

Allen, who was taken into custody last Wednesday, has already had his initial hearing, where he entered a not guilty plea, according to Carroll County Prosecutor Nicholas McLeland, and is expected to return to court in January. In regard to how they narrowed down Allen as the suspect, McLeland explained:

“Per the court order, we cannot talk about the evidence that’s in the probable cause.”

Superintendent Carter noted in regard to the young girls’ families:

“I wish I could take their hurt away, but I can’t.”

Libby’s grandmother and legal guardian, Becky Patty later explained to ABC News how surprised she was to hear the alleged murder was a Delphi resident, noting:

“How can somebody do that and then just go on living life like nothing happened?”

Libby’s sister, Kelsi German, confessed she felt the murder must have been someone who knew the area, but didn’t want to believe they were “right here among us.” She noted the “new obstacles and emotions that we have to learn how to deal with” regarding the development in the case, and Mike celebrated the police force, which “sacrificed their own family time” to solve his granddaughter’s case. He added:

“They never let up.”

A constant roller coaster for over five years, finally coming to what seems to be an end. More news regarding specific evidence is likely to come out soon, but in the meantime, we hope justice is served to the fullest extent, and the ongoing investigation yields all the remaining answers needed to do so. May Libby and Abby finally rest in peace.