Malia Obama Criticized for Her Smoking Habit After Hanging Out With Sasha’s Beau Clifton Powell Jr. 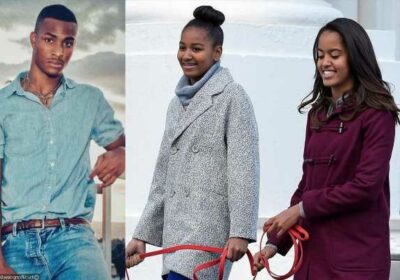 The older daughter of former President Barack Obama is seen taking a break to puff on a cigarette during a casual stroll through a public park with her sister’s boyfriend.

AceShowbiz -Malia Obama continues to be scrutinized even after her father left the White House. The eldest daughter of former President Barack Obama and Michelle Obama was criticized for her smoking habit after she was spotted hanging out with Clifton Powell Jr., who has been rumored to be dating her sister Sasha Obama.

Malia and Clifton were seen hanging out in Los Angeles on Sunday, April 24. In pictures obtained by Daily Mail, the two youngsters were enjoying a casual stroll through a public park together.

At one point during the walk, they took a brief break so the former First Daughter could smoke a cigarette. She was sitting on a park bench and puffing a cigarette, while Clifton remained standing nearby.

Both of them dressed casually for the stroll. Malia sported a pair of baggy blue jeans and an oversized grey Chicago White Sox T-shirt teamed with a pair of clogs from Birkenstock. The 23-year-old carried a cream tote with photographer Lorna Simpson’s name on it and a white HydroFlask water bottle, while her long hair was styled in braids. She also wore a white mask, which she removed when she was smoking.

Meanwhile, Clifton wore a long-sleeved navy shirt with a pair of matching sweatpants, white socks and white striped slides. He completed his laid-back look with a navy baseball cap which he wore backwards, with a green mask pulled down around his chin.

After pictures of their outing surfaced online, Malia was criticized for her smoking habit. “I thought he was dating Sasha? and eww she smokes,” one person commented on the photos. Another disappointed fan wrote, “She has a beautiful shape. But anytime I see Gen Y or Z smoking cigarettes it throws me off.”

“i wonder why she smokes. she smokes like she have a household of kids getting on her nerves..,” a third weighed in. Someone else blasted her, “Why is her stupid a** smoking? Too damn young to be hooked on nicotine.”