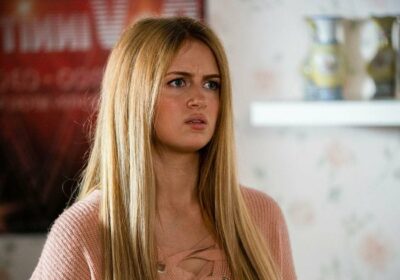 Maisie Smith slipped into a teeny outfit for a night out on the town with fellow EastEnders actress Danielle Harold, who plays Lola Pearce on the BBC soap.

Tiffany Butcher favourite Maisie, who has played her character on Albert Square on and off since 2008 but is set to leave soon, opted for a powder pink matching ensemble for the evening that showed off her toned midriff and pins.

The 20 year old star, who got to the final of Strictly Come Dancing in 2020, allowed her auburn locks to hang naturally with a wavy fringe as she paired a plunge bikini-style dress with a studded belt around her hips.

With her navel on show, Maisie proudly placed her hands on her hips and grinned for the camera as she took a snap with Danielle, 29, and their friend in the middle.

Maisie completed her look with a pair of high boots, choosing minimal jewellery for the night out.

While Danielle was a complete contrast in shimmering black jeans and a long-sleeved black top that featured a crossover design at the chest.

The actress's platinum blonde locks were styled into a bouncy blow dry and she finished her look with dramatic smokey eye makeup and false eyelashes.

Maisie however, went au natural with just a light smattering of mascara and a slick of lipstick for the occasion.

The pair's friend was very glitzy too, opting for a bright blue sequinned number.

The trio danced and giggled away as they partied on a lavish night out in Camden at the weekend.

In more snaps, Maisie could be seen leaning over and sticking out her bottom as she made some naughtier poses for the pictures.

It comes as the star has been raising awareness of mental health struggles and opening up about her own on her TikTok page.

Maisie recently shared a video detailing her state of the mind throughout her week, and was praised by fans for talking openly about her feelings.

Maisie's final scenes on EastEnders are set to air in the coming weeks as she gets ready to move on to other projects.

For all your latest updates on Maisie Smith and other EastEnders stars, sign up to OK!'s daily newsletter.