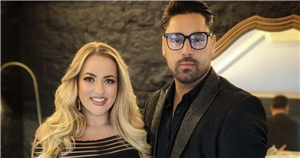 Megan Wolfe has warned Married At First Sight fans to get extra popcorn ahead of Monday 20th September's episode.

The 26 year old blonde beauty, who is married to Robert 'Bob' Voysey on the show, shared a snap of herself and her husband dressed up for the third dinner party on the series.

Megan looked gorgeous in a black off-the-shoulder body con dress. She wore an understated makeup look to show off her natural beauty and allowed her long blonde locks to cascade down in a wavy hairstyle.

She smiled while stood next to her MAFS husband Bob, who looks suave in a black shirt, trousers and a black blazer with a hint of glitter on. As she shared the stunning couple's photo with her 28,700 followers, Megan teased the action in the upcoming episode of the E4 series.

Megan wrote in the caption: "I wish I could tell you the drama has been curbed. But tonight you’re gonna need extra popcorn" followed by a popcorn emoji.

While Megan anticipated fans would ask her about her outfit, so she added: "The dress is soooo old. It was my 21st birthday dress from @quizclothing".

Fans were quick to share their excitement about the episode, which airs on Monday 20 September at 9pm on E4, in the comments. One wrote: "Eeeeeek can’t wait" while another added: "You look lovely! Can’t wait for tonight" followed by a blue heart emoji.

Megan then responded to the comment with: "thank you [red heart emoji] it’s a good one x", referring to the upcoming episode.

As a third said: "Corr blimey you look lovely! Can’t wait for tonight!!"

Megan has been at the centre of some drama during her time on the reality show as it was revealed in a dramatic commitment ceremony that she shared a kiss with Jordon Mundell, who was married to Alexis Conomou at the time.

Alexis and Jordon split, causing them to leave the experiment. But, Megan and Bob decided to give their romance another shot and got closer during 'Yes Week'. Despite leaving the experiment, Alexis took an interest in Ant Poole, who was married to Nikita Jasmine.

Alexis and Ant then returned to the experiment, but not as a married couple, to see if romance developed between them.

Upon her return, Alexis appeared to forgive Megan. But, later confronted her again at an awkward girls day brunch to which Megan told Alexis: "I am sick of paying for a mistake

"A mistake which you championed before it happened Alexis. You might as well have got your cheerleader pom-poms out."

Alexis then replied with: "I did not give you the go ahead to go and kiss your husband!"

For the latest updates on Megan and the rest of the Married At First Sight stars, sign up to OK!'s daily newsletter.