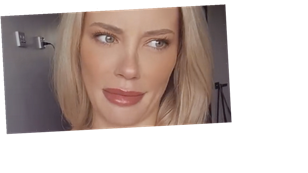 Married At First Sight Australia star Jessika Power has hit back after she was criticised for saying she was “dying” from a kidney infection.

Jessika, 28, concerned fans as she revealed she had been rushed to hospital with “immense pain” as she posted on Instagram on Saturday 27 February.

She then revealed had been suffering from a kidney infection, but the phrase “dying” ruffled a few feathers with her UK fans.

Critics left comments on her a photo she shared of herself, showing her posing in a blue paisley patterned outfit.

One wrote: “Maybe don’t say ‘I’m dying when the world is in a pandemic. So insensitive”.

Jessika then revealed she had also received messages from critics as she hit back while filming herself in a video posted on her Instagram story.

She said: “The UK trolls hit differently, I woke up this morning to a few messages from people in the UK because obviously I was in the hospital over the weekend.

“In one of my videos, I said: 'I'm in the hospital and I'm basically dying'… And when my voice goes like that, how do you know I'm not being sarcastic?

“It's called sarcasm. I know you Brits are a little bit dry, I had some messages from people saying: ‘Oh my god, did you know my wife, my this and that, had kidney failure’ and I'm so sorry.

“I'm sorry to hear if anybody has gone through that in their life or lost anybody like that due to any serious illness, but me saying 'I'm basically dying' doesn't mean I'm a bad person.”

She continued: “It doesn't mean I'm looking for attention and it doesn't mean I need to learn common decency for other people that are actually sick.

“This is my platform and if you don't like it, b***h, there is an unfollow button and you can go press it an stay the f**k off my Instagram.”

It comes as the final reunion episode of Married At First Sight Australia aired in the UK on Monday 1 March.

Brits were shocked to see Jessika deny she had hit on Nic Jovanovic moments before flirting with Dan Webb.

But, she has insisted she didn’t make a move on Nic as she told Metro.co.uk: “So you remember there was a big fight between Martha, Cyrell, Nic, Mick, and me down in Martha’s hotel room, and Cyrell goes crazy and throws s**t.

“What they made out to you guys was that there were a few days in between that fight, and then we had the dinner party where I ‘hit on Nic’.

“What happened was the dinner party was the next night, straightaway. My producer said to me, ‘Well, why don’t you go grab Nic and just see if he’s alright?’ I was like, ‘Why?’ because I was too busy talking to Dan.”