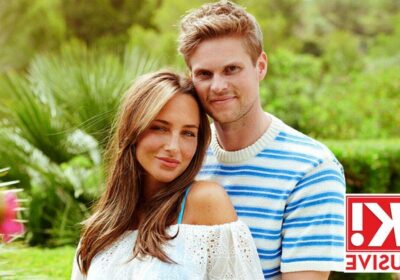 As fans sit down to watch the new series of Made in Chelsea, James Taylor has opened up on welcoming his first child with his fiancée Maeva D'Ascanio in the coming weeks.

The Chelsea favourite, 26, revealed he and Maeva, 30, conceived "around Valentine's Day" – and he was "shocked" for two weeks after Maeva discovered she was pregnant.

Hi James! How excited were you all to be heading abroad for a summer special?

It was nice to get away. We were split into two different groups and it was very much the couples’ villa and the singletons’ villa. It’s always the singletons that are the same people. Do you think the singletons are naughtier when they’re on holiday than they are when they’re back in Chelsea?

Yeah, there’s definitely summer fever. There was something in the water out in Mallorca. The single boys made the most of the beautiful Spanish women, let’s just say that!

There’s been lots of talk about whether Emily Blackwell and Miles Nazaire will get together. What’s your take on that?

Miles would love to taste the forbidden fruit in every sense of the word, emotionally and physically, I’ll be crude about it. Emily wants a man and Miles isn’t quite man enough for her. I just don’t think they’d work as a couple. I think they’re compatible for Instagram for three months but then they’ll go down the drain as quick as a Love Island recoupling. Your fiancée Maeva made no secret of her dream of marrying you. How intense was that?

It was six to nine months of incessant, every couple of days, like, “When are you going to do it?” I already had the date in mind and I wanted to hide it from my friends, but I did ask her dad in April 2020. It’s sweet that she was so desperate for it to happen. I see that as part of her character – when she wants something, she really wants it. So that makes me confident, knowing that she wants me. She doesn’t half-ass anything!

She’s also expecting your first child. How are you feeling about becoming a dad?

It definitely was not planned. We conceived around Valentine’s Day. When she told me I think I went into two weeks of proper shock. Then I started analysing what I felt and it was excitement. It only started feeling real recently. I was downstairs folding baby clothes that she’d been washing, I had one of those moments being like, “Wow, something’s going to fit in that in a couple of weeks.” It really hit me that I’m going to be a dad. How has the pregnancy changed your relationship?

A month in, I turned around to her and was like, “I feel even more connected to you,” and she feels the same. I don’t think you can do anything more together than create a life.

It’s part of both of you and is the best thing I can humanly imagine right now that you can do with someone you love. I didn’t realise I could love her more. She’s carrying our child – that’s so special.

Have you decided whether you’re going to show the baby on Made In Chelsea?

I think we probably would be happy to have certain parts of our life including the baby on the show. We’ve done a few scans on the show, so we’re showing the journey. We reveal the gender on the show. How are your wedding plans coming along?

We have a venue. We went to view a place in England. It’s going to be December next year. Maeva puts a lot of importance on her body and the way she feels. She doesn’t want any baby weight on her and we want the baby at the wedding. It’ll be an English winter wedding, with friends, family and people from the show.

Will you let the cameras in?

I don’t see why not. I know Ollie and Gareth [Locke] did it and it looked beautiful. So I think we’re swinging towards saying yes.