Mackenzie Standifer to Maci Bookout: Talk That Trash to My Face, Bish! 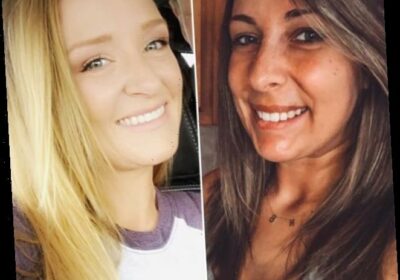 At this point, the conflict between Mackenzie Standifer and Maci Bookout is so intense that it could sustain its own series/

This feud is bigger than Teen Mom OG, and it seems to be getting more intense by the day.

Maci and Mackenzie have both claimed that they want to meet up and settle the score face-to-face.

And they both say that the other party refuses to arrange a sit-down because they’re afraid.

Afraid of what exactly?

Well, presumably a Jerry Springer-style hair-pulling beatdown, which is exactly the sort of ratings boon TMOG could use these days,

We’re sure MTV would love it if production gave security the day off and allowed the two moms to rip each other’s extensions out on camera.

But Maci and Mackenzie would need to agree to it first which seems unlileky to happen:

“Mackenzie reached out to [production] a few weeks ago, letting them know that she wanted to sit down with Maci privately and see if they could resolve some of their issues,” a source close to the situation tells The Ashley’s Reality Roundup.

“Maci refused to give the producers an answer on whether or not she was willing.”

It seems that Mackenzie also texted Maci privately to see if the two of tbem could arrange a meeting without any help from production.

“In fact, that was filmed for next season- Mackenzie texting Maci, and talking about how she just wants things to not be so tense between the families,” says the insider.

“She thought a sit-down lunch or something might be a good thing to help them talk out their issues.”

Interestingly, Maci has repeatedly insisted that she’s the one who’s dying to meet face-to-fase.

“Mackenzie is brave sitting on a couch responding to strangers on social media about my son, but still not brave enough to sit on a couch and talk to me at the reunion,” Bookout tweeted during last week’s episode.

Bookout even went so far as to claim that she would love to step into a boxing ring with Standifer.

But The Ashley’s source says Maci’s bluster is all for show.

“If Maci wanted to go face-to-face with Mackenzie, she could have already,” says the source.

“The producers know it would be ratings gold, so they’ve been highly encouraging it.”

So Mackenzie wants to meet up, and MTV is dying to make it happen — we guess the only one who needs to sign off on this thing is Maci!

And it doesn’t look like that will be happening anytime soon.

Mackenzie recently claimed that Maci is afraid of her, and fans assumed that Ryan Edwards’ wife was throwing shade in order to save face.

Now, however, it seems there might be something to those claims.

Whatever the case, the ball is in Maci’s court, and what happens next is entirely up to her.

MTV should probably just start filming all of these people 24/7, because it seems like major drama is about to unfold.