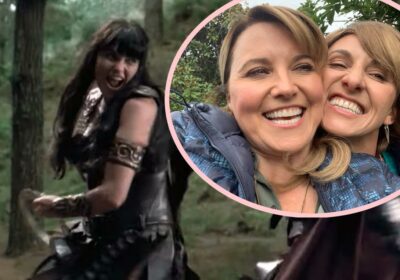 Lucy Lawless is a hero IRL, and she’s proved it once again this week.

The Xena: Warrior Princess star stepped up when she heard about one of her stuntwomen in need. You probably don’t know the name Dayna Grant, but you’ve seen her work doubling for Xena, as well as for Charlize Theron in Mad Max: Fury Road, and in Wonder Woman 1984. She’s also stuck with Lucy for years and recently worked with her in Ash vs Evil Dead and My Life Is Murder.

Here she is doing superhuman work on horseback:

Sadly, Dayna was injured badly on the set of an upcoming project — and needed emergency brain surgery. And it’s expensive. So a fundraiser was started to help out — and the IRL Warrior Princess came to her friend’s rescue by slaying it!

On Sunday, Lucy tweeted out a link to the site and urged fans of her projects to give, writing:

“Help me help our dear friend, Xena Stuntwoman, @Daynastunts get emergency brain surgery after head injury on set for an upcoming project. She has made actresses look cool on horseback and fighting on #WonderWoman, #MadMax, SnowWhite, #Xena, #AshvsEvilDead.”

Not only that, she offered to match fan donations, writing:

“For every Xena fan or #AshVsEvil Dead fan who donates, I will match you dollar for dollar till we get the job done. This woman deserves all the love. Put #XenaLove on your donation and I’ll match you!”

AH-Mazing! And you know what? It worked! Because, as we know, Xena always wins a fight. In just a few days Lucy and the fans raised over $78,000 in New Zealand money — that’s over $50k! Lucy tweeted out:

“Thanks for your generosity, Dana will get the emergency brain surgery she needs ASAP!”

We’re so happy to hear it. Breaking down in tears, Dayna also took to social media, sharing her gratitude for followers’ love and support. She tweeted on Monday:

We’re wishing her a speedy recovery!