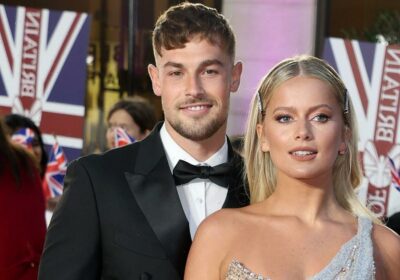 Love Island’s Andrew Le Page surprised his girlfriend, Tasha Ghouri, after getting a tattoo with a message in sign language, also featuring her cochlear implant.

Andrew and Tasha, who came fourth in this year’s Love Island, are one of four couples still going strong.

After recently getting matching rose tattoos with Tasha, Andrew, 27, ventured back to the tattoo studio on his own to surprise his girlfriend with a touching tribute.

Andrew teased the ink on his Instagram story and hours later shared the design, which features “I love you” in British Sign Language with her cochlear implant wrapped around it.

Revealing the ink on Twitter, Tasha, 23, wrote: “So Andrew came home and surprised me with his new tattoo, I actually can’t even!!!!!!! How beautiful.

“It’s “ily” in BSL with my cochlear implant wrapped around.”

Beneath the post, Tasha added: “Also just to clarify * the ily is ASL but it is also used in BSL as it became more used – there is another way to sign ily in BSL which is what me and my dad did to each other when he came into the villa.

“But both can be used in bsl as I know both.”

The post has since received over 50k likes and thousands of comments gushing over the gesture.

“This is truly beautiful and so genuine. He clearly loves you,” another person said.

One fan shared a personal story, and wrote: “This is beautiful I have a BSL tattoos one of them spell out ‘My mum My friend.’ My mum sadly passed away last year to covid BSL is a beautiful language.”

Earlier this year, Tasha, who received her implant at age five, spoke of a harrowing experience at 16 when her implant broke during her A levels.

“At the age of 16 it broke when in the middle of my A-Levels, I had to have a re-operation, I couldn’t hear for months. My mental health deteriorated,” she wrote on TikTok.

Luckily, Tasha found her passion in the form of dancing and modelling, which propelled her to new heights.

She explained: “I made the big move to London on my own at the age of 21,” she went on. “I got scouted on Instagram by a modelling agency.

“Since then I’ve been modelling for big brands like ASOS and Boux Avenue, I went viral for modelling an earring which showed my cochlear implant. Was in so many magazines and articles worldwide.”