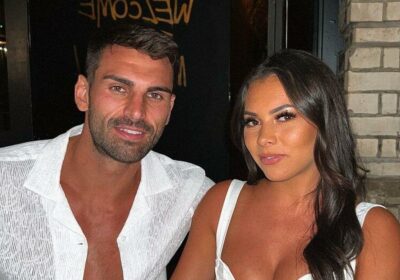 Love Island star Adam Collard was attacked while on a night out with girlfriend Paige Thorne, with a group “ripping his top” in a bar.

The couple – who recently revealed Adam's dad has a nickname for Paige – were enjoying a few drinks in a bar with Adam’s friends in his hometown of Newcastle when they were spotted by a group of men.

The group are said to have approached the 26 year old personal trainer and an altercation quickly occurred.

A video shows Adam surrounded by people on a dancefloor, while he tries to defend himself, with his shirt ripping open at one point during the incident.

Adam’s friends can also be seen trying to break up the tense moment as a bouncer approaches the crowd towards the end of the video. An eyewitness said the trouble started when a group spotted the couple at the bar just after midnight.

They told The Sun: “Adam and Paige were just on a night, it wasn’t an official appearance or anything.

“Then people started to rip his top off and it all kicked off.

“It’s no surprise he wanted to defend himself and was obviously looking out for Paige as well. “They were just out a drink together with friends and they didn’t need that hassle.

“The bouncers came over and it finally calmed down and Adam and Paige left after that.”

A spokesperson for Adam confirmed the altercation had occurred as they told the publication: “Adam was trying to enjoy a quiet night in his hometown with friends when a large group of men began aggressively harassing them.

“Despite several attempts to diffuse the situation, the men continued to become more aggressive and started physically attacking Adam.

“Understandably, Adam and his friends were extremely shaken up by the situation and felt it was best to leave and we’re safely escorted by the security team outside. No further action has been taken.”

OK! has approached both Adam and Paige's reps for further comment.

Adam was first on the hit ITV dating show in 2018 and made a grand return to Majorca this year,

But following meeting beau Paige on the show, it seems as though he’s returned to his job as a personal trainer in Newcastle following the show.

Following his second stint on the programme, he took to Instagram last week to promote his gym as he gets back to regular life.

Working out in a clip where he could be seen wearing nothing but a pair of grey shorts, Adam said: "Riding that wave but the mission remains the same… I love this game for the physical, the mental and helping so many people along the way.

"Let’s get better together."

Many of his 1.2million fans were quick to comment, gushing over his physique as one said: "If I could like this twice I would," with a fire emoji.

Another shared: "Need Adam collard as my PT x," as a third posted: "Mans winning in life haha". While a fourth added: "Always laser focused despite life’s rollercoaster – I love it".